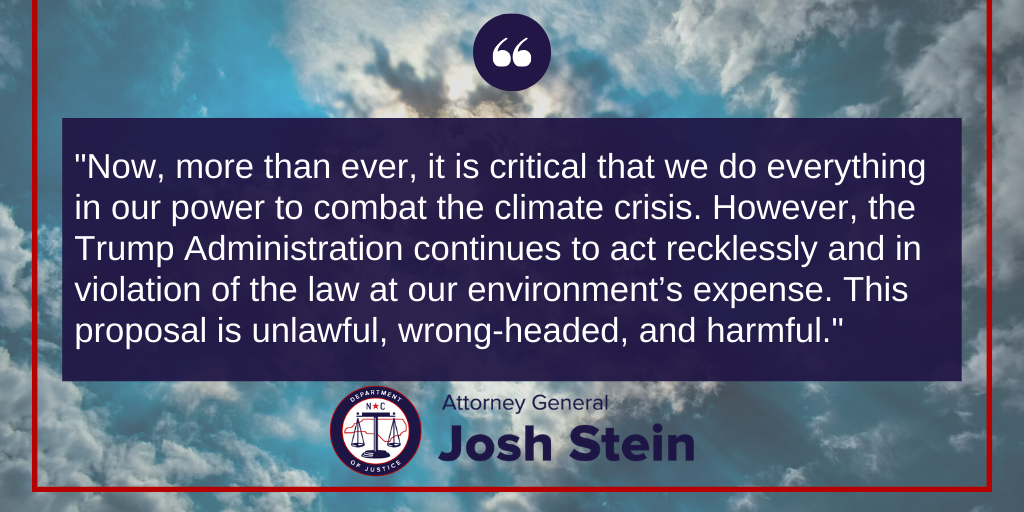 (RALEIGH) Attorney General Josh Stein today opposed an unlawful proposal by the U.S. Environmental Protection Agency (EPA) to gut the current standards that limit emissions of methane and other harmful pollutants from new, reconstructed, and modified facilities in the oil and natural gas industry. This sector is the largest industrial source of methane emissions, a greenhouse gas up to 84 times more potent than carbon dioxide in its ability to trap heat.

“Now, more than ever, it is critical that we do everything in our power to combat the climate crisis,” said Attorney General Josh Stein. “However, the Trump Administration continues to act recklessly and in violation of the law at our environment’s expense. This proposal is unlawful, wrong-headed, and harmful.”

The proposed rule would increase emissions of hazardous air pollutants, methane, and volatile organic compounds (VOC), accelerating the impacts of climate change. VOC emissions contribute to the formation of ozone, which poses a significant threat to public health, particularly to children, older adults, and those suffering from chronic lung disease and asthma.

The weakened standards would undermine a commonsense rule that reduces harmful pollutants and recovers valuable natural gas that would otherwise be lost. The current standard, which was set in 2016, is estimated to prevent 300,000 tons of methane emissions in 2020 and 510,000 tons in 2025. In 2016, the EPA analyzed the costs and benefits of the current standard, including the revenues generated from recovered natural gas that would otherwise be vented, and determined that the standard would result in a net benefit estimated at $35 million in 2020 and $170 million in 2025.

Attorney General Stein signed this letter along with the Attorneys General of California, Colorado, Connecticut, Delaware, Illinois, Iowa, Maine, Maryland, Michigan, Minnesota, New Jersey, New Mexico, New York, Oregon, Rhode Island, Vermont, Washington, the Commonwealths of Massachusetts and Pennsylvania, the District of Columbia, as well as City of Chicago, the City and County of Denver, and the Colorado Department of Public Health and Environment.