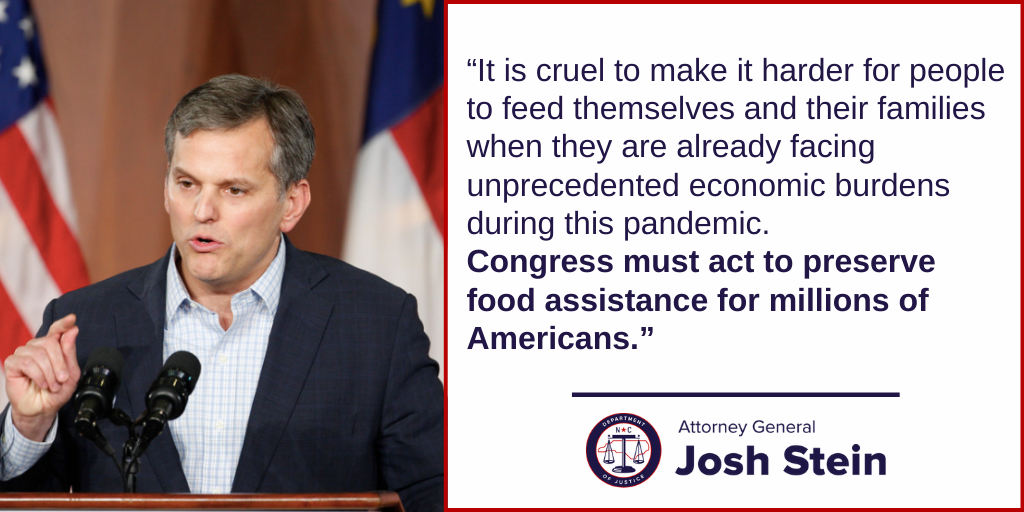 (RALEIGH) Attorney General Josh Stein today urged Congress to block the Trump administration’s attempts to cut vital food assistance for millions of Americans. Attorney General Stein and 23 other attorneys general argue that during the unprecedented economic turmoil due to the COVID-19 pandemic, Congress should work to protect and expand the Supplemental Nutritional Assistance Program (SNAP), our nation’s largest anti-hunger program.

“It is cruel to make it harder for people to feed themselves and their families when they are already facing unprecedented economic burdens during this pandemic,” said Attorney General Josh Stein. “Congress must act to preserve food assistance for millions of Americans.”

In a letter to Congress, the coalition expressed support for provisions in the House-passed HEROES Act that would prohibit the use of appropriation funds for three U.S. Department of Agriculture (USDA) administrative rules. The rules would:

SNAP, previously known as “food stamps,” is most important national anti-hunger program and a critical part of federal and state efforts to help lift people out of poverty. The program provides people with limited incomes the opportunity to buy nutritious food that they otherwise could not afford.

The current pandemic underscores the need to preserve SNAP food assistance. In March alone, 40 percent of American households with incomes below $40,000 lost jobs, and from March 15 to May 15 of this year, 40.8 million Americans filed for unemployment. Unsurprisingly, the number of Americans applying for SNAP benefits has also spiked. As more Americans struggle to put food on the table with each passing day, cuts to food assistance programs that millions need to survive would only compound the suffering of this public health emergency. Attorney General Stein previously called on the Trump administration to suspend its proposal to cut SNAP food assistance.