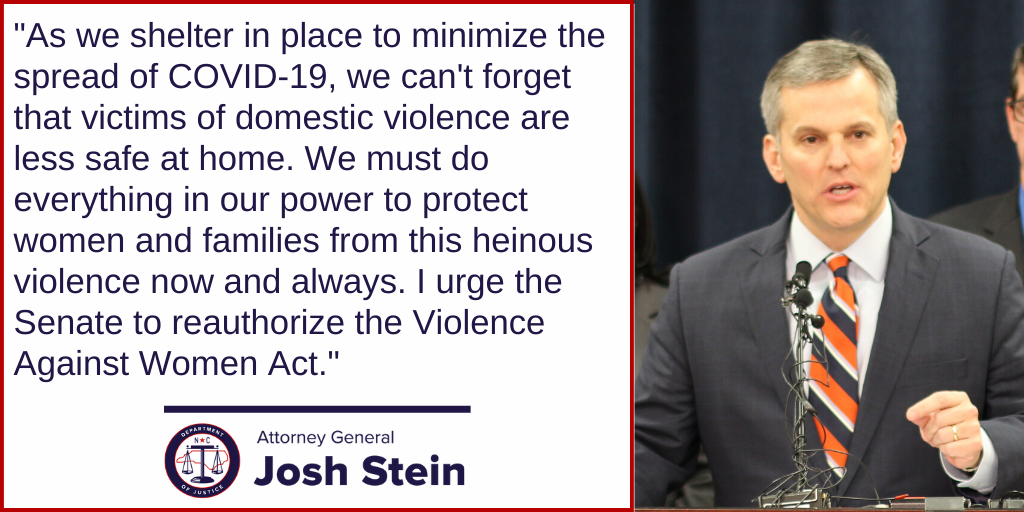 (RALEIGH) Attorney General Josh Stein today urged the U.S. Senate to reauthorize the Violence Against Women Act, which expired more than a year ago. In a letter to the Senate, Attorney General Stein and a coalition of 24 attorneys general note that the COVID-19 pandemic exacerbates isolation, uncertainty, and economic instability, increasing the risk to domestic violence victims and making reauthorizing the act even more urgent.

“As we shelter in place to minimize the spread of COVID-19, we can’t forget that victims of domestic violence are less safe at home,” said Attorney General Josh Stein. “We must do everything in our power to protect women and families from this heinous violence now and always. I urge the Senate to reauthorize the Violence Against Women Act.”

In April of 2019, the U.S. House of Representatives passed a bill with bipartisan support reauthorizing the act. But after more than a year, the Senate has yet to take up consideration of the bill, nor has it taken up a companion bill sponsored by Sen. Dianne Feinstein, D-Calif.

The House bill expands the protections of the Violence Against Women Act by:

“Reauthorization of (the Violence Against Women Act) will not end the scourge of gender based violence, but it is an important step toward more fully addressing the tragic epidemic,” the letter states. “The importance of urgent action is underscored by the particular challenges faced by victims and survivors during the COVID-19 outbreak. We urge you to move quickly to adopt the House-passed bill or the Senate companion sponsored by Senator Feinstein. Women in our states are counting on it.”

Domestic violence is also a threat to law enforcement, the letter notes. According to a 2017 report by the U.S. Department of Justice, 29 percent of the 133 line-of-duty deaths responding to calls for service were related to domestic disputes.

If you or someone you know is a victim of domestic violence, there are service providers across the state available to help. Please call the National Domestic Violence Hotline at 1-800-799-7233 or go to the https://www.thehotline.org/.