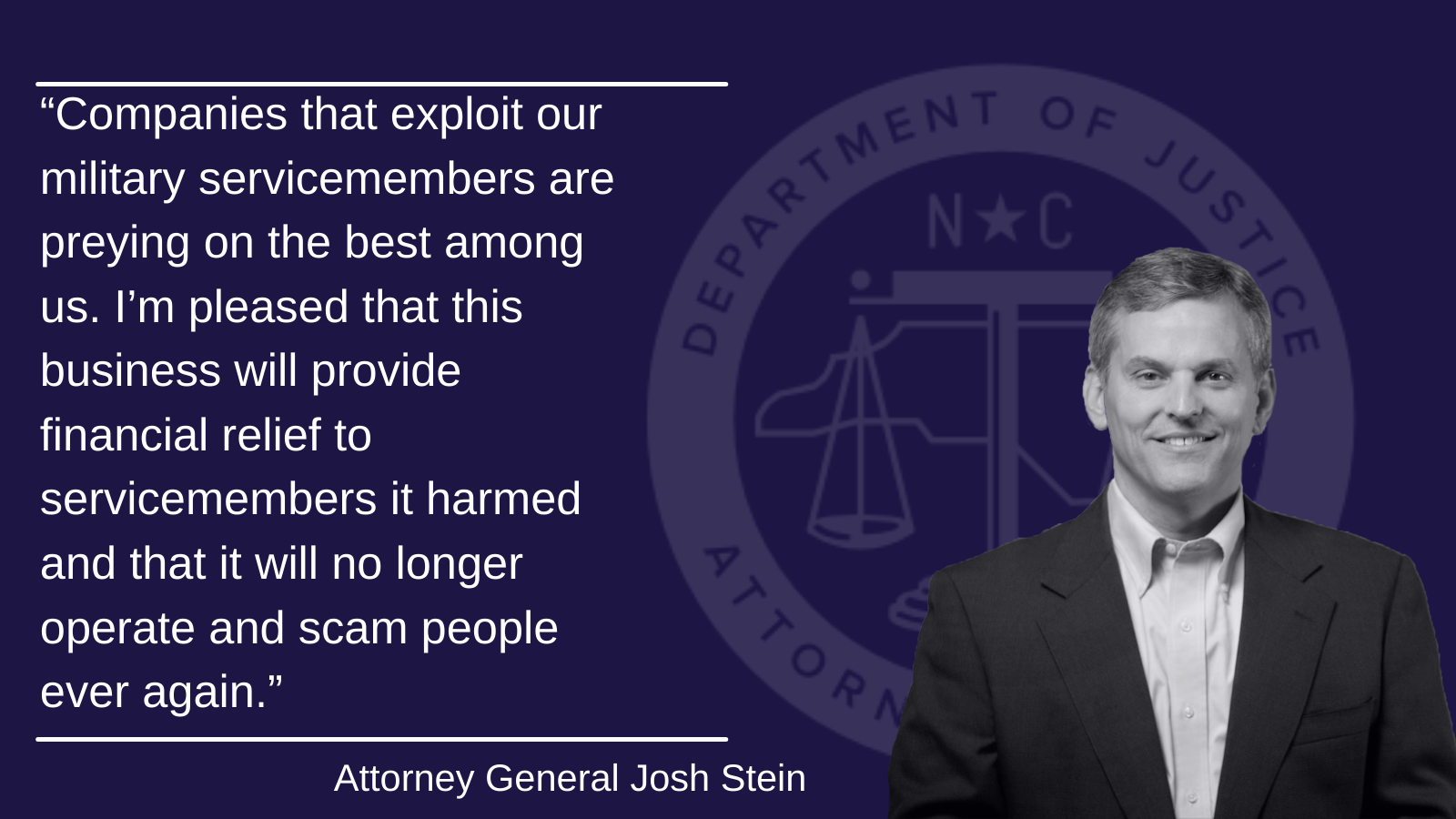 More than 6,300 North Carolina servicemembers will get more than $3.2 million in financial relief

(RALEIGH) Attorney General Josh Stein today won $34.2 million in financial relief for more than 46,000 servicemembers and veterans who were deceived and defrauded by Harris Jewelry, a national jewelry retailer that operated retail stores near and on military bases around the country – including in Fayetteville near Fort Bragg and in Jacksonville near Camp Lejeune. Harris Jewelry made false claims that financial jewelry purchases through the company would result in higher credit scores, claimed that customers had to buy a protection plain to finance their purchase, and failed to provide required written disclosures and contract authorizations. As a result of today’s order, Harris Jewelry will refund servicemembers for the warranties they were tricked into purchasing, stop collecting on more than $20 million in outstanding debt, correct bad credit scores that affected servicemembers’ credit histories, dissolve their businesses, and pay $1 million to all 18 states. In North Carolina, the company will stop collecting on $1,817,599.81 of outstanding debt held by 1,191 North Carolina servicemembers, provide $1,410,634.93 in refunds to 5,098 North Carolina servicemembers, and vacate judgments totaling $40,232.15 for 37 North Carolina servicemembers.

“Companies that exploit our military servicemembers are preying on the best among us,” said Attorney General Josh Stein. “I’m pleased that this business will provide financial relief to servicemembers it harmed and that it will no longer operate and scam people ever again.”

Servicemembers who entered into a predatory financing loan from Harris Jewelry between January 2014 and July 2022 are eligible for restitution if they paid for warranties. An independent monitor will be selected to oversee the relief and will contact eligible servicemembers and veterans by email and letter so they can claim their restitution.

Harris Jewelry got many of its customers through “Operation Teddy Bear”. The company would sell teddy bears in military uniforms and claim it would donate a portion of the sale to charities. But Harris had no contract with the charity it claimed to support and gave consumers conflicting information about the actual amount that would be donated to charity. In 2018, Attorney General Stein settled with Operation Troop Aid Inc., Harris’s original charitable partner in Operation Teddy Bear and began investigating Harris Jewelry.

In addition to this deceptive marketing, Harris offered servicemembers predatory lending contracts as a way to build or improve their credit scores. Instead of basing these contracts on legitimate factors such as credit score or potential income, Harris tied it to servicemembers’ payday through factors such as branch of service, the amount of time they have remaining on the term of enlistment, and the category of merchandise they purchased. Servicemembers were led to believe that they were investing in the Harris Program and the jewelry they purchased was a gift from Harris Jewelry. The jewelry itself was significantly overpriced and of poor quality – one popular product was purchased by Harris at $77.70 but sold to customers at $799. Harris offered servicemembers protection plans on the jewelry, which they claimed were optional but were added to nearly all eligible transactions without consumers being aware. The protection plans ranged from $39.99 to $349.99, but in some instances, the cost of the protection plan exceeded the wholesale cost Harris paid for the item.

Today’s order determines that Harris Jewelry violated the FTC Act, the Truth in Lending Act, the Electronic Fund Transfer Act, the Military Lending Act, the Holder Rule, and state laws. It also requires Harris Jewelry to stop collecting $21,307,229 in outstanding debt that is held by 13,426 servicemembers, provide $12,872,493 in refunds to 46,204 servicemembers and delete any negative credit entries reported to consumer reporting agencies, and vacate judgments against 112 consumers totaling $115,335.64.

A copy of the order is attached.