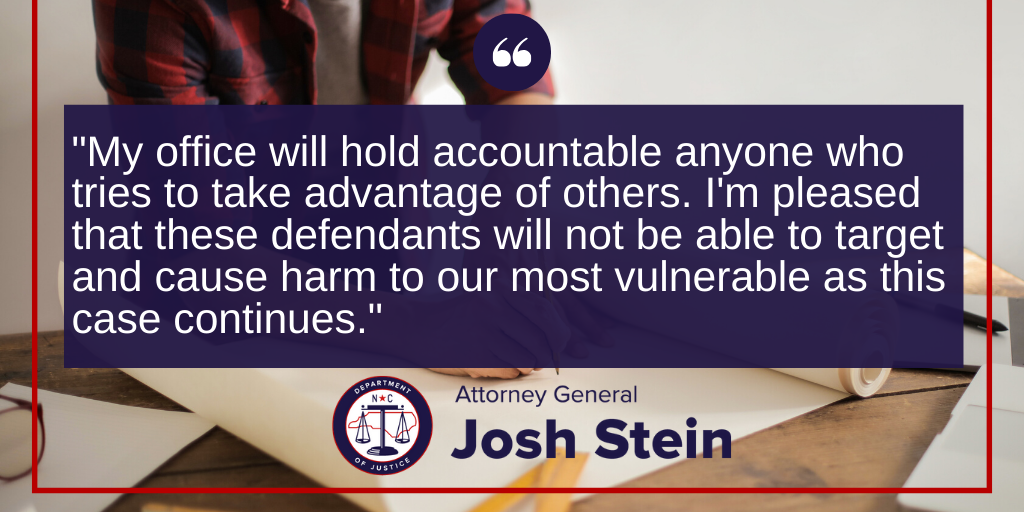 “My office will hold accountable anyone who tries to take advantage of others,” said Attorney General Josh Stein. “I’m pleased that these defendants will not be able to target and cause harm to our most vulnerable as this case continues.”

Attorney General Stein filed a lawsuit against the defendants earlier this month, alleging that they perpetrated a residential contracting scheme by targeting and taking money from elderly North Carolinians and failing to complete the contracting work.

Garcia, an unlicensed general contractor, allegedly manipulated vulnerable elderly homeowners, many of whom suffer from age-related health issues and rely on fixed incomes. After befriending the victims and gaining their trust, Garcia convinced them to hire him and his company JH Home Improvements, Inc. to complete unnecessary home repairs and improvements that were not completed, and talked the victims into engaging him and his company for additional overpriced and unnecessary projects. Garcia and his company did not always prepare a written contract—but when they did, the contract was vague and incomplete. In the rare instances where work was completed, it was often substandard. If customers discovered the fraud and refused to continue paying Garcia and his company, he allegedly responded with denials, excuses, and threats. Garcia has also borrowed money from his victims, and has failed to pay back most of these loans.

Garcia was previously incarcerated for violating a consent order with the North Carolina Licensing Board for General Contractors that barred him from doing general contracting work in North Carolina until he was properly licensed. During Garcia’s incarceration, Flores was allegedly contacting existing customers and demanding payments, even though no work was being done.

In addition to this temporary restraining order, Attorney General Stein is seeking a preliminary injunction, other injunctive relief, civil penalties, restitution for victims, and attorneys’ fees.

A copy of the order is available here.