Attorney General Josh Stein has been leading the national fight against the national teen vaping epidemic and e-cigarette companies’ marketing to young people. He was the first attorney general to file a lawsuit against Juul in May 2019 for illegally marketing their products to young people in North Carolinas and misrepresenting the nicotine potency in its products.

Nicotine, which is highly addictive, is a neurotoxin – meaning it is poisonous to the human brain. The brains of teenagers are particularly vulnerable to nicotine and have what one study describes as “exquisite sensitivity” to nicotine’s neurotoxic effects, according to a 2003 study.

Even small and brief exposures to nicotine can cause lasting neurobehavioral damage in adolescents.

When a teenager gets addicted to nicotine, it makes it much more likely that he or she will later become a user of traditional cigarettes or illegal drugs, according to a Surgeon General 2016 report on e-cigarette use among youth and young adults.

Distributing e-cigarettes to minors is illegal in North Carolina and most other states. Despite that, from 2018 to 2019, use of e-cigarettes increased among high-schoolers by 78%, and among middle-schoolers by 48%, according to the NCDHHS 2017 NC Youth Tobacco Survey Middle & High School Fact Sheet.

The FDA and CDC released information from the National Youth Tobacco Survey in 2019. 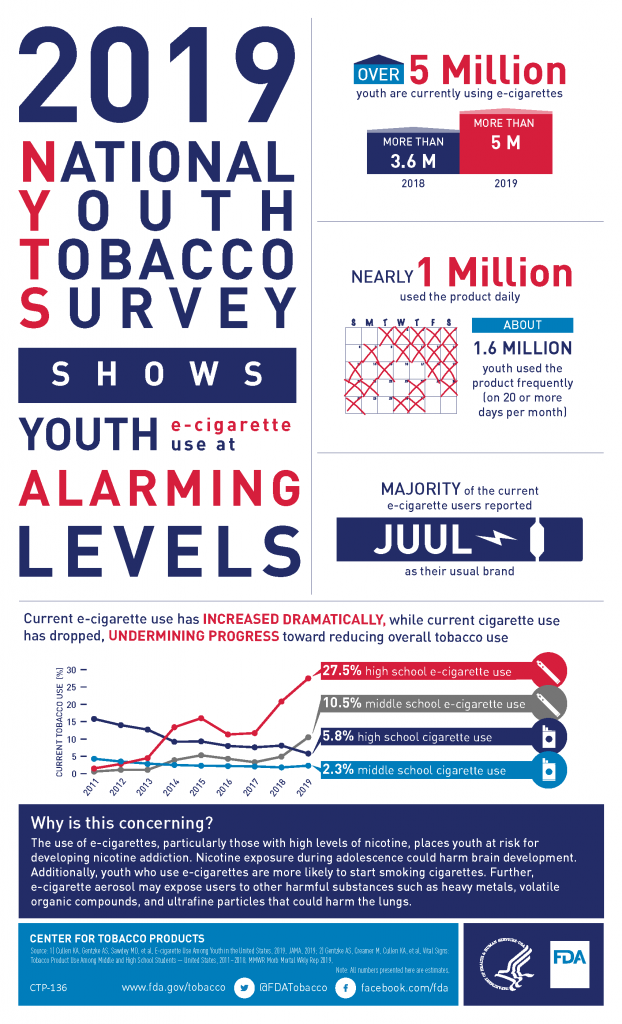 He sent the company a civil investigative demand to ask for more information about Juul’s marketing practices, retailers, contact with resellers, efforts to verify age before purchase, and any youth education and awareness programs.

He filed the first state lawsuit against e-cigarette manufacturer Juul in May 2019 for selling its e-cigarettes to attract young people and for misrepresenting the potency and danger of nicotine in its products in violation of North Carolina’s Unfair and Deceptive Trade Practices Act.

In September 2019, Attorney General Stein commended the FDA for its decision to ban e-cigarette flavors in order to deter kids from vaping.

The ban prevents the sale of all e-cigarette flavors except for tobacco. Attorney General Stein said, “adults who want to transition from traditional cigarettes to e-cigarettes can still do that.”

Attorney General Josh Stein urged the Food and Drug Administration (FDA) in February to strengthen its guidance on the enforcement of electronic cigarette, or e-cigarette, regulations. He is part of a coalition of 27 attorneys general urging the FDA to expand its guidance to include menthol flavors and disposable, refillable products.