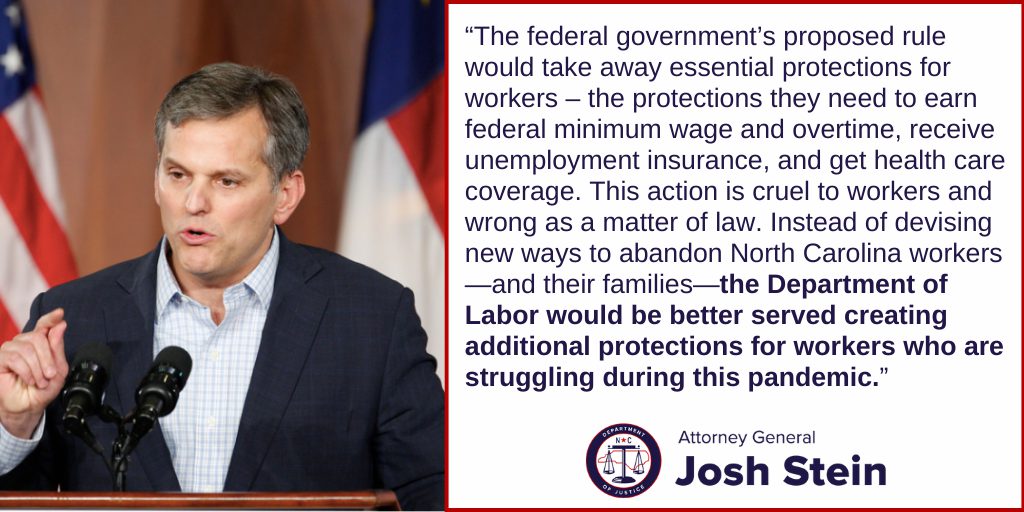 (RALEIGH) Attorney General Josh Stein today called on the Trump administration to withdraw a proposed rule that would strip workers of key protections under the Fair Labor Standards Act (FLSA). The proposed rule would make it easier for employers to classify employees as independent contractors, making these workers ineligible for federal minimum wage and overtime pay and increasing their taxes and other out-of-pocket costs.

“The federal government’s proposed rule would take away essential protections for workers – the protections they need to earn federal minimum wage and overtime, receive unemployment insurance, and get health care coverage,” said Attorney General Josh Stein. “This action is cruel to workers and wrong as a matter of law. Instead of devising new ways to abandon North Carolina workers—and their families—the Department of Labor would be better served creating additional protections for workers who are struggling during this pandemic.”

The FLSA was signed into law more than 80 years ago to establish a baseline of critical workplace protections, such as minimum wage and overtime, for workers across the country. The rule would:

In a letter to U.S. Department of Labor Secretary Eugene Scalia, Attorney General Stein and 23 other attorneys general argue that the rule would disregard the text and purpose of the FLSA, break with established court precedents on the definition of “employee” and independent contractor qualifications, and violate the Administrative Procedure Act. The coalition also argues that the DOL doesn’t satisfactorily explain the proposed rule or quantify how it would impact workers. This is particularly troubling in light of the ongoing COVID-19 pandemic, which has left millions unemployed and relying on workplace protections and benefits that are available to employees, not independent contractors.