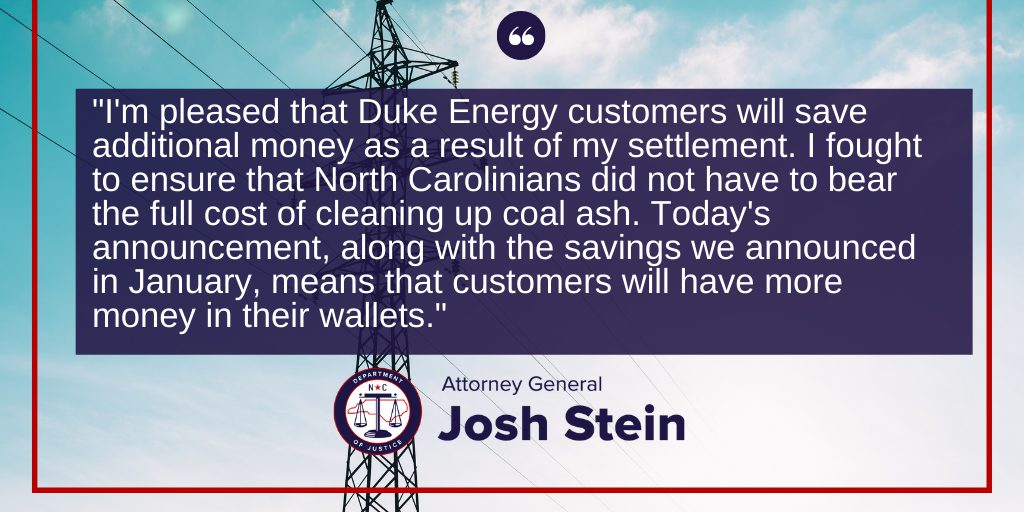 (RALEIGH) Attorney General Josh Stein today announced that as a result of his January coal ash settlement with Duke Energy, electricity customers will save approximately $215 million in future energy costs. These funds are a result of 14 settlements that Duke Energy reached with 23 insurance companies over coal ash coverage policies, the last of which was settled this week.

“I’m pleased that Duke Energy customers will save additional money as a result of my settlement,” said Attorney General Josh Stein. “I fought to ensure that North Carolinians did not have to bear the full cost of cleaning up coal ash. Today’s announcement, along with the savings we announced in January, means that customers will have more money in their wallets.”

“We’re glad to see some more relief for customers who actually shouldn’t be forced to pay any of the costs to clean up Duke’s toxic mess,” said Dave Rogers, Southeast deputy regional director for the Sierra Club’s Beyond Coal campaign. “In the meantime, Sierra Club will keep working alongside North Carolina communities for a 100 percent clean, equitable, and affordable energy future that doesn’t require them to spend another hard-earned dime on dirty energy.”

The Attorney General’s Office is not a party in the 14 settlements, but under the terms of Attorney General Stein’s January settlement, Duke Energy will put funds collected from coal ash litigation and settlements toward benefiting customers and reducing their coal ash cleanup costs.

The settlement Attorney General Stein reached in January will save North Carolina electricity customers more than $1.1 billion on their utility bills over the next 10 years. Furthermore, Duke Energy is also required to excavate 80 million tons of coal ash in North Carolina under a December 2019 settlement with the Department of Environmental Quality (represented by the Attorney General’s Office), the Sierra Club, and other community groups.