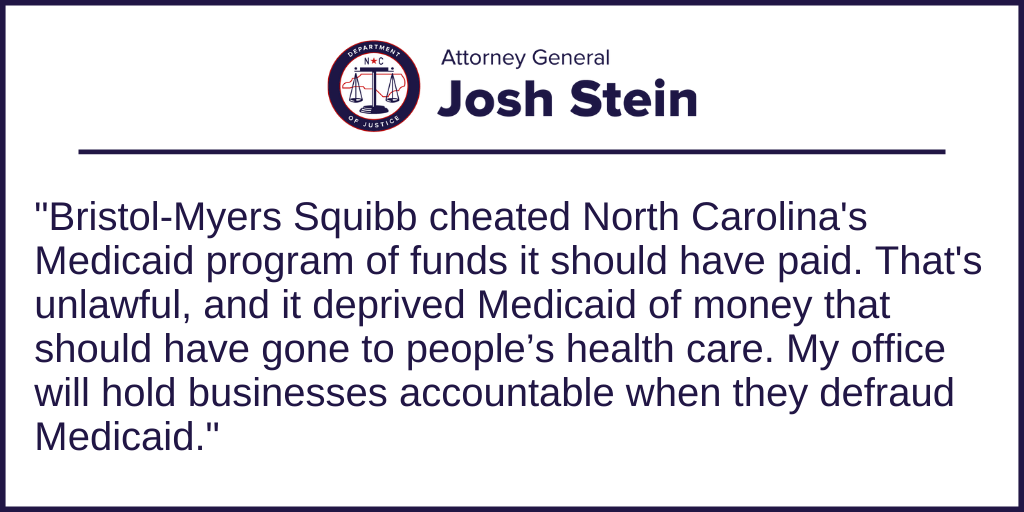 “Bristol-Myers Squibb cheated North Carolina’s Medicaid program of funds it should have paid,” said Attorney General Josh Stein. “That’s unlawful, and it deprived Medicaid of money that should have gone to people’s health care. My office will hold businesses accountable when they defraud Medicaid.”

The settlement resolves allegations that Bristol-Myers Squibb underpaid drug rebates to the states. Under federal law, drugmakers must return a portion of the amount that state Medicaid programs pay for their drugs. This rebate is designed to ensure that states pay competitive prices for drugs. The rebates are calculated based on a percentage of the average prices that drug wholesalers pay for each of the drugs. The manufacturer reports this price to the federal government, and the greater the price, the greater the rebate the manufacturer must pay states for the drug.

A whistleblower’s complaint alleged that Bristol-Myers Squibb falsely decreased the price of drugs it reported to the federal government, and as a result, paid less to the states, by improperly treating certain fees paid to wholesalers as discounts and improperly failing to include certain price appreciation amounts it received from wholesalers.