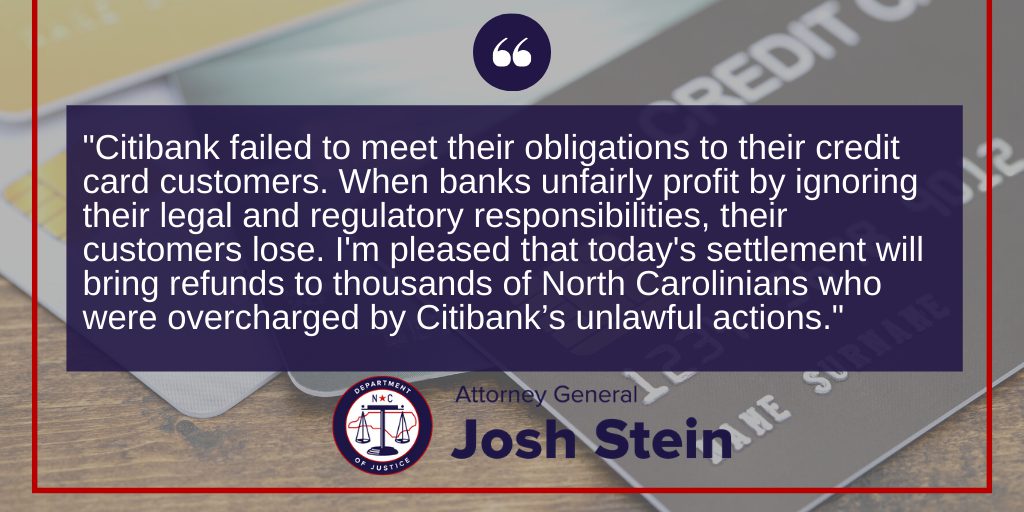 (RALEIGH) Attorney General Josh Stein today announced that Citibank will pay $4.2 million to resolve allegations that it overcharged credit card interest for thousands of people. As a result of the settlement, Citi will refund $683,000 to the owners of approximately 4,300 Citi credit card accounts in North Carolina. Approximately 25,000 current and former Citi customers residing in the five states that took action will receive refund checks.

“Citibank failed to meet their obligations to their credit card customers,” said Attorney General Josh Stein. “When banks unfairly profit by ignoring their legal and regulatory responsibilities, their customers lose. I’m pleased that today’s settlement will bring refunds to thousands of North Carolinians who were overcharged by Citibank’s unlawful actions.”

People do not need to take any action to receive their funds, which will be sent as checks to eligible consumers in the coming months. Only those Citi credit card customers who meet certain criteria set by the settling states will receive a refund check. People who have questions can call toll-free 855-914-4657. The settlement will be distributed through settlement administrator Epiq Class Action & Claims Solutions, Inc.

The investigation arose from Citibank’s failure, from February 2011 to August 2017, to properly reevaluate and reduce the annual percentage rate (APR) for certain credit card accounts consistent with the requirements of the Credit Card Accountability Responsibility and Disclosure Act of 2009 (CARD Act). For more than six years, Citibank failed to properly lower credit card interest rates for certain people who were entitled to reductions in their APR. Attorney General Stein alleges that Citibank’s conduct in connection with the APR reevaluation issues violated the North Carolina Unfair and Deceptive Practices Act.

As explained in detail in a 2018 Consent Order between Citibank and the Consumer Financial Protection Bureau (CFPB), the CARD Act requires banks that issue credit cards to perform a “look back” at least every six months to review accounts where the bank has increased the APR due to credit risk or other factors and determine whether the factors that prompted the increase have changed. When indicated by the look back review, the CARD Act requires the bank to reduce the account’s APR. The CFPB’s Consent Order alleges that Citibank failed to properly implement the CARD Act’s look back requirements from 2011 to 2017.

Attorney General Stein is joined in this settlement by the Attorneys General of Iowa, Massachusetts, New Jersey, and Pennsylvania.