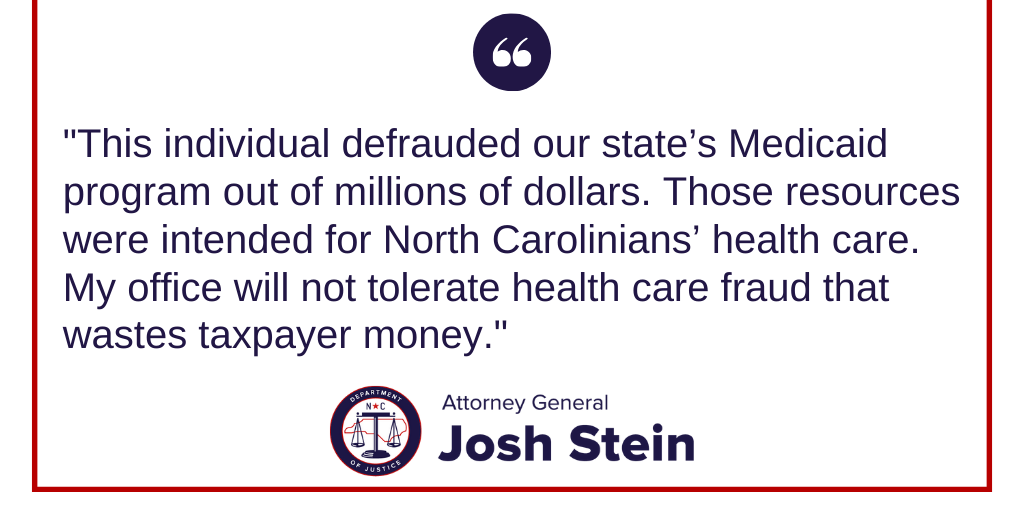 “This individual defrauded our state’s Medicaid program out of millions of dollars,” said Attorney General Josh Stein. “Those resources were intended for North Carolinians’ health care. My office will not tolerate health care fraud that wastes taxpayer money.”

From June 2015 to December 2017, Taylor conspired with his brother and others to submit fraudulent reimbursement claims to the Medicaid program for services that were either never provided or misrepresented the actual services provided in order to increase the reimbursement amount received. Taylor recruited other co-conspirators to participate in the scheme and obtained prospective patient lists with individuals’ Medicaid information to submit the fraudulent claims. The Taylor brothers received approximately $6.1 million in reimbursements from the Medicaid program through their scheme.

Taylor also failed to file the appropriate tax return forms after receiving and depositing more than $4.1 million in Medicaid reimbursements to his bank accounts and admitted to taking steps to willfully evade income tax obligations.

Jerry Lewis Taylor pleaded guilty to health care fraud conspiracy and tax evasion in June and is currently awaiting sentencing. Three other defendants have also been charged in connection with the scheme.