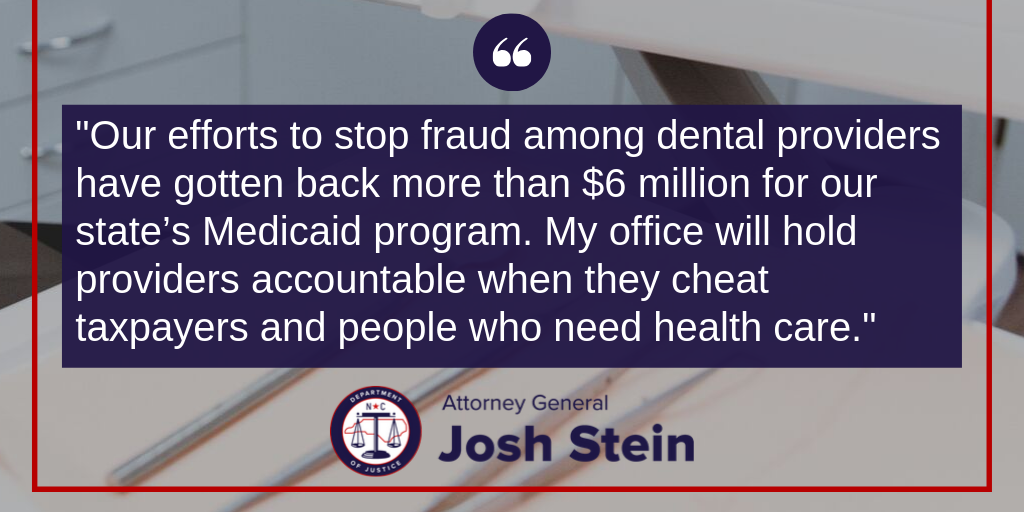 “Our efforts to stop fraud among dental providers have gotten back more than $6 million for our state’s Medicaid program,” said Attorney General Josh Stein. “My office will hold providers accountable when they cheat taxpayers and people who need health care.”

According to the settlement, between Jan. 1, 2015, and Aug. 31, 2019, Dr. Simoncic and his practice submitted claims involving detailed oral evaluations and anesthesia services performed on Medicaid recipients. The services were not medically necessary, had no supporting clinical documentation, or were performed in violation of Medicaid policy. Dr. Simoncic has agreed to pay back $567,125 to the Medicaid program.

Operation Root Canal involves a wide variety of dental services, including dental cleanings, use of nitrous oxide, repetitive restorations on the same tooth, palliative care, and upcoding of patient examinations. Through this effort, MID has reached settlements with 10 dental providers, resulting in more than $6.3 million being paid back to the Medicaid program.

This settlement was obtained with the assistance of MID and the North Carolina Department of Health and Human Services’ Division of Medical Assistance – Clinical Policy and Program Integrity.