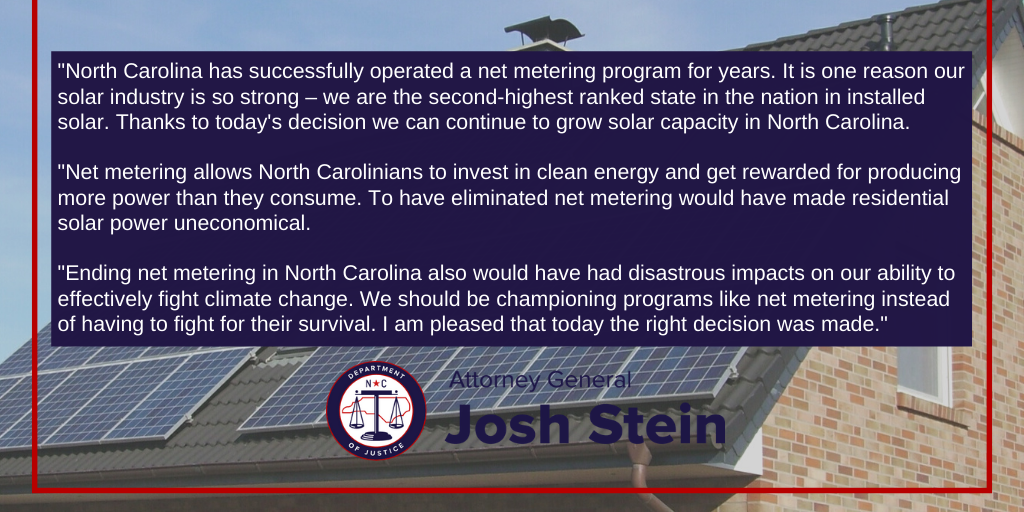 (RALEIGH) Attorney General Josh Stein today released a statement in response to the Federal Energy Regulatory Commission (FERC)’s decision to reject a petition that would have ended state net metering programs. These programs allow homeowners to install solar panels and sell back to the grid any excess power that they generate. The petition would have had a disastrous impact on North Carolina’s solar industry and would have taken away states’ authority to regulate net metering. Attorney General Stein intervened in the case in June to protest the petition and seek the decision that FERC made today.

“North Carolina has successfully operated a net metering program for years. It is one reason our solar industry is so strong – we are the second-highest ranked state in the nation in installed solar. Thanks to today’s decision we can continue to grow solar capacity in North Carolina.

“Net metering allows North Carolinians to invest in clean energy and get rewarded for producing more power than they consume. To have eliminated net metering would have made residential solar power uneconomical.

“Ending net metering in North Carolina also would have had disastrous impacts on our ability to effectively fight climate change. We should be championing programs like net metering instead of having to fight for their survival. I am pleased that today the right decision was made.”

The solar industry has created more than 240,000 jobs nationwide. For nearly 40 years, state laws have allowed net metering, or the assessing of retail service charges that reflect a customer’s net energy usage.