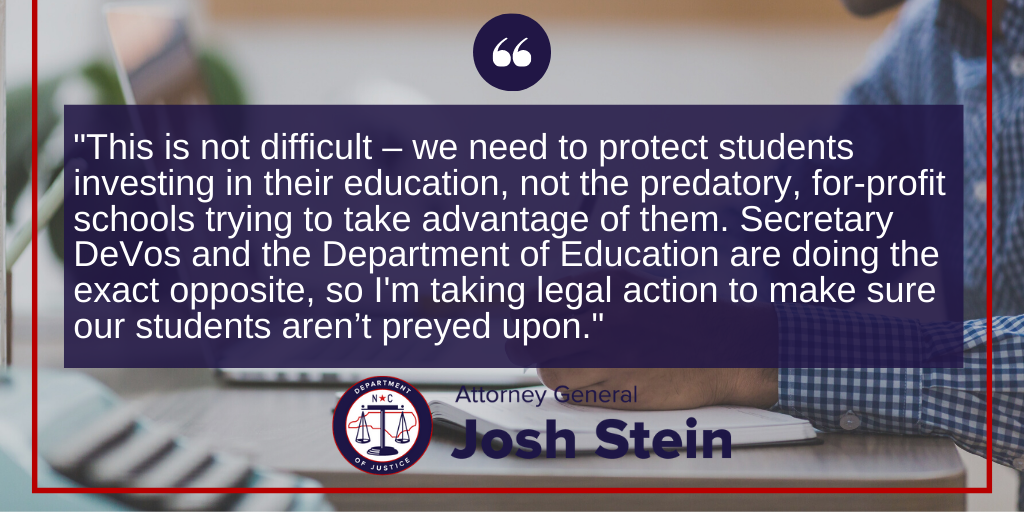 (RALEIGH) Attorney General Josh Stein today filed a lawsuit against Secretary of Education Betsy DeVos and the U.S. Department of Education (ED) challenging their action to unlawfully repeal the 2016 borrower defense regulations and replace them with regulations that benefit predatory for-profit schools at the expense of defrauded students.

“This is not difficult – we need to protect students investing in their education, not the predatory, for-profit schools trying to take advantage of them,” said Attorney General Josh Stein. “Secretary DeVos and the Department of Education are doing the exact opposite, so I’m taking legal action to make sure our students aren’t preyed upon.”

The 2016 borrower defense regulations established critical protections for student borrowers who have been misled or defrauded by predatory schools, built on lessons learned from the collapse of Corinthian Colleges – a predatory, for-profit chain of colleges that left tens of thousands of students across the nation in need of relief. The regulations gave misled and defrauded borrowers access to a consistent, fair, and transparent process to seek debt relief, and also protected taxpayers by holding accountable schools that engage in misconduct. They also ensured that financially troubled schools would provide financial protection to the government to ensure that, if they fail, taxpayers would not be left holding the bag.

Under the Trump administration, the ED repealed the 2016 regulations and replaced them with new regulations in 2019 that make it virtually impossible for victimized students to obtain financial relief and roll back oversight over unscrupulous and predatory schools. The 2019 regulations created a process designed to thwart relief for defrauded students and shield predatory schools from being held accountable.

In their lawsuit, the coalition of 23 attorneys general argues that the ED’s decision to repeal and replace the 2016 regulations violates the Administrative Procedure Act because it is arbitrary and capricious and does not comply with Congress’ requirement that the Secretary implement a meaningful process for borrowers to obtain relief. The coalition is asking the court to vacate the ED’s new regulations.