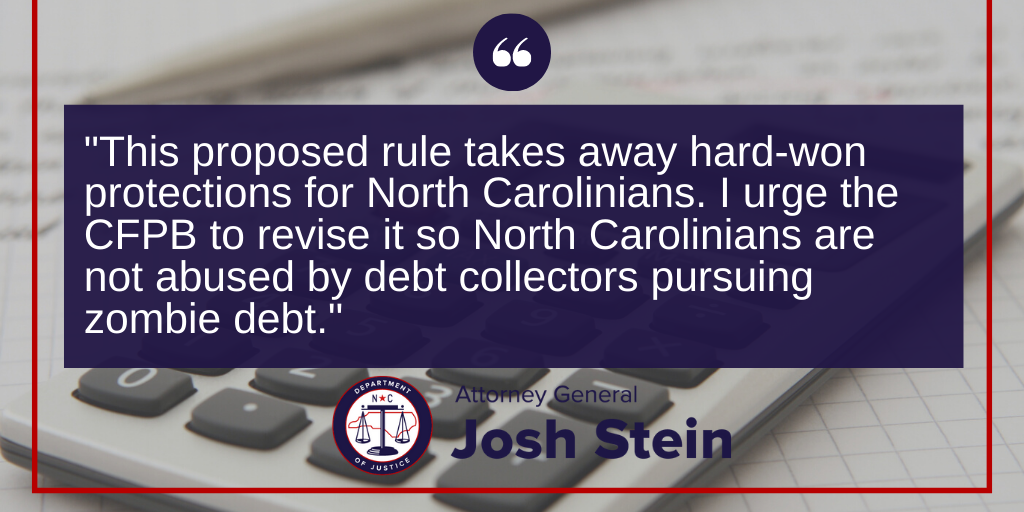 (RALEIGH) Attorney General Josh Stein called on the Consumer Financial Protection Bureau (CFPB) to revise a proposed rule that would weaken protections for consumers and would help debt collectors.

“This proposed rule takes away hard-won protections for North Carolinians,” said Attorney General Josh Stein. “I urge the CFPB to revise it so North Carolinians are not abused by debt collectors pursuing zombie debt.”

When the statute of limitations on a debt has expired, that debt is known as time-barred, or zombie, debt. In North Carolina, in some instances, the statute of limitations on a debt can be revived if the consumer takes certain actions, such as making a partial payment or acknowledging the debt in writing. Under North Carolina law, a collection agency is prohibited from seeking an acknowledgement by the consumer of a zombie debt or asking the consumer to waive their rights unless the collection agency discloses the nature and consequences of the acknowledgement or waiver and the fact that the consumer is not legally obligated to respond or agree.

Additionally, the CFPB’s proposed rule would require debt collectors to give specific disclosures regarding time-barred debt and the possibility of revival. As the states argue in their letter, the CFPB’s model disclosures were not adequately tested (or in some cases not tested at all), and the disclosure language will confuse consumers. The disclosures also do not adequately account for variations in state law.