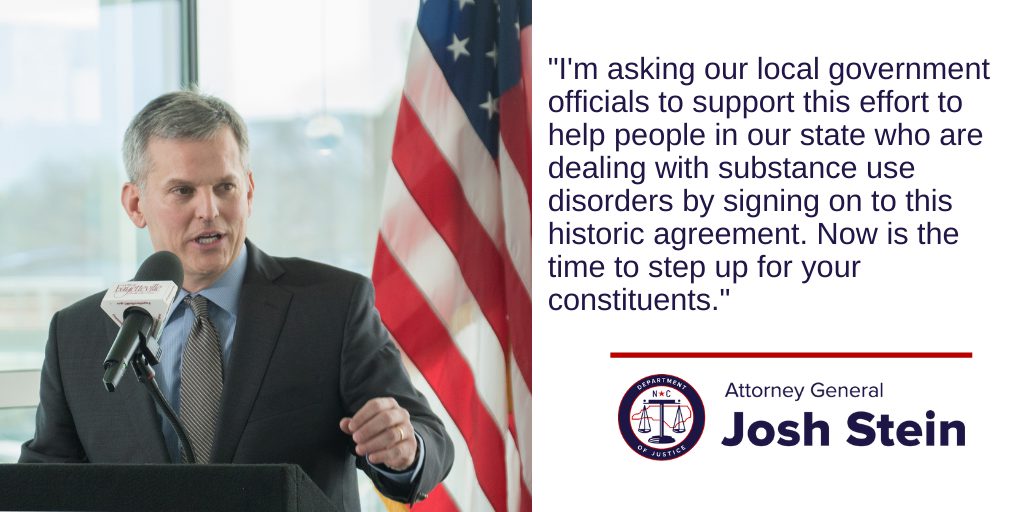 (RALEIGH) Attorney General Josh Stein today released the following statement after it was announced that at least 48 states and territories have signed on to the $26 billion agreement with the nation’s three major pharmaceutical distributors – Cardinal, McKesson, and AmerisourceBergen – and Johnson & Johnson over the companies’ role in creating and fueling the nationwide opioid crisis. The companies have informed the states that this broad showing of support will allow the agreements to move forward. Today’s news marks an important milestone for the agreement: the state sign-on period has been successful. The agreement will now move into the subdivision sign-on period, which will last until January 2, 2022.

“Today’s milestone represents enormous progress in our work to get help for North Carolinians struggling with opioid addiction in every community across the state. The level of support by states we achieved is a remarkable showing of unity and commitment across the country to address this problem, and I am confident that the same will be true within North Carolina as we now move into the subdivision sign-on period.

“Today’s news is important, but we have more to do here in North Carolina to maximize the amount of money we receive to address the crisis. More than 70 local governments in our state have already signed on to a Memorandum of Agreement detailing how North Carolina’s recoveries will be allocated and used. Now, we call on all local governments to join these agreements with the companies to ensure that North Carolina receives its full share of nearly $750 million. At least eighty percent of these funds will go directly to local communities, where they can deliver evidence-based treatment and recovery services to people who desperately need them. I’m asking our local government officials to support this effort to help people in our state who are dealing with substance use disorders by signing on to this historic agreement. Now is the time to step up for your constituents.

“The more than 16,000 North Carolinians we’ve lost to opioid overdoses in the past two decades have left a trail of grieving families and devastated communities in their wake. We owe it to them to do everything we can to make sure that other lives aren’t cut short by this deadly epidemic and other families don’t have to experience the same grief and loss.”

Attorney General Stein and Tennessee Attorney General Herbert Slatery led the negotiations of this agreement on behalf of the states, along with the attorneys general from California, Colorado, Connecticut, Delaware, Florida, Georgia, Louisiana, Massachusetts, New York, Ohio, Pennsylvania, and Texas.