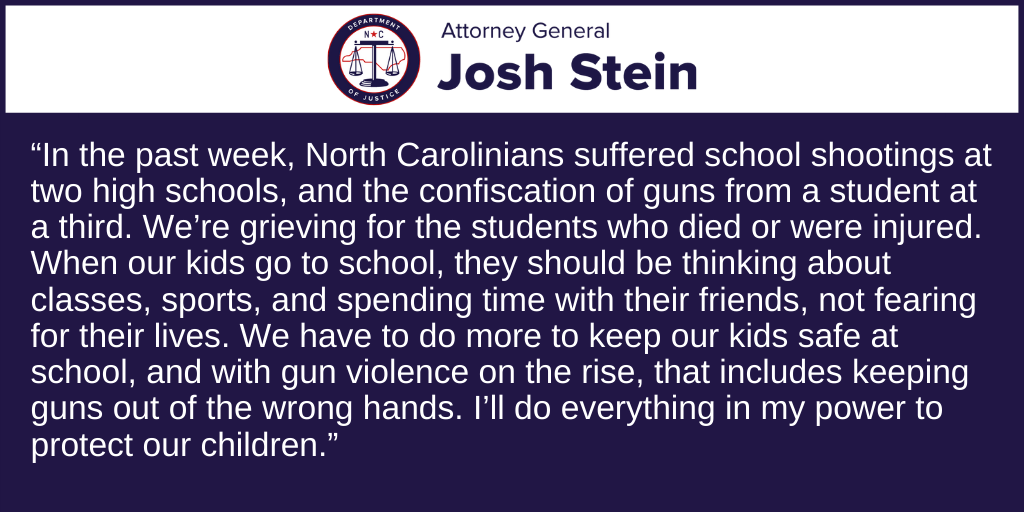 “In the past week, North Carolinians suffered school shootings at two high schools, and the confiscation of guns from a student at a third. We’re grieving for the students who died or were injured,” said Attorney General Josh Stein. “When our kids go to school, they should be thinking about classes, sports, and spending time with their friends, not fearing for their lives. We have to do more to keep our kids safe at school, and with gun violence on the rise, that includes keeping guns out of the wrong hands. I’ll do everything in my power to protect our children.”

The attorneys general filed the brief in the U.S. Court of Appeals for the Fourth Circuit in Hirschfeld v. Bureau of Alcohol, Firearms, Tobacco, and Explosives, a lawsuit challenging federal statutes and regulations that bar 18-to-20-year-olds from purchasing handguns from federally-licensed dealers. The plaintiffs in the case argue that such restrictions violate the Second Amendment, and a three-judge panel agreed, holding that the federal laws are unconstitutional. The federal government is now asking the full court to rehear the case.

In the brief, the coalition explains that the decision is the first to strike down an age-based restriction on the sale or access to firearms and, in doing so, breaks with the decisions of multiple other federal courts. Age-based restrictions on the sale of firearms are lawful and reasonably tailored to the government’s interest in public safety. The attorneys general argue that the full court should rehear the case because the current decision could raise meritless questions about the constitutionality of state laws that limit young people from accessing firearms and because the decision eliminates an important safeguard to prevent gun violence.