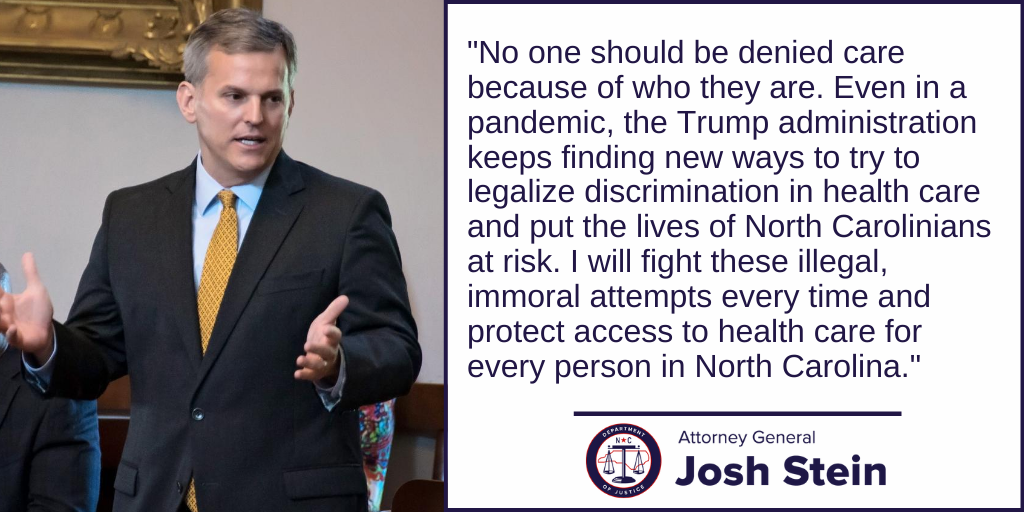 (RALEIGH) Attorney General Josh Stein today filed an amicus brief in the U.S. Court of Appeals for the Second Circuit opposing the Trump administration’s illegal health care refusal rule. The rule jeopardizes the health and safety of North Carolinians by allowing anyone remotely involved in a health care transaction to discriminate against specific patients based on the health care worker’s religious or moral beliefs. This exemption would allow discrimination, particularly against women and LGBTQ individuals, and endanger people’s ability to get critical lifesaving care.

“No one should be denied care because of who they are,” said Attorney General Josh Stein. “Even in a pandemic, the Trump administration keeps finding new ways to try to legalize discrimination in health care and put the lives of North Carolinians at risk. I will fight these illegal, immoral attempts every time and protect access to health care for every person in North Carolina.”

Attorney General Stein and three other attorneys general, whose brief supports a multistate challenge led by New York, urge the Court of Appeals to uphold the district court ruling. The district court found that the rule is unlawful, exceeds the agency’s authority, is arbitrary and capricious, and is contrary to the United States Constitution.

States already have laws and regulations in place that balance the need to protect access to health care while respecting providers who have conscience objections, in accordance with numerous existing federal conscience provisions. However, the health care refusal rule goes beyond existing provisions. It would create a broad exemption not just for religious reasons, but for “moral, ethical, or other” reasons as well. The rule would compromise patient access to care and encourage discrimination against vulnerable patient populations, including women, people of color, LGBTQ individuals, and rural and low-income communities.

In addition to impeding access to basic health care, including reproductive and emergency care, the rule has substantial material costs. It threatens hundreds of billions of dollars in federal funding for health care programs and services using unlawful, draconian penalties for non-compliance.

Attorney General Stein is joined in filing this amicus brief by the Attorneys General of California, Maine, and Washington.