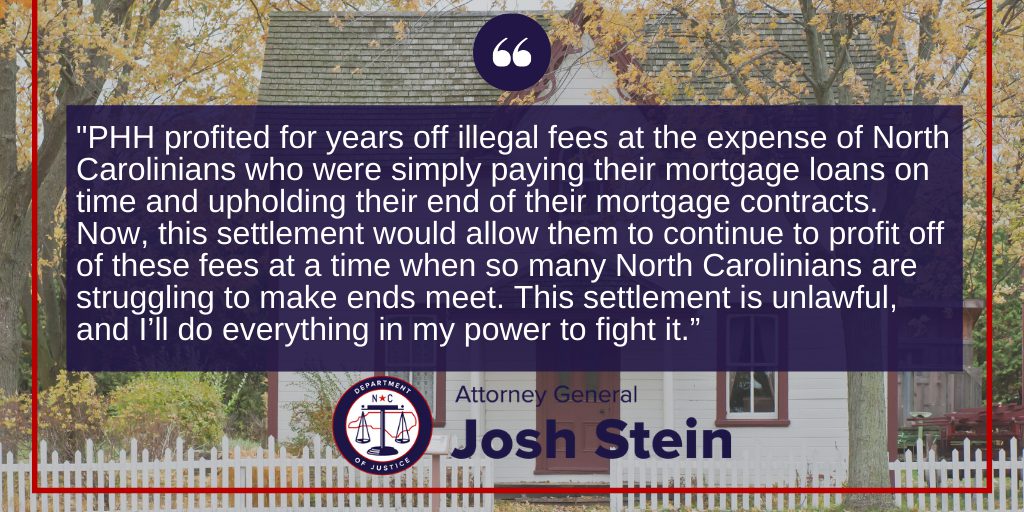 “PHH profited for years off illegal fees at the expense of North Carolinians who were simply paying their mortgage loans on time and upholding their end of their mortgage contracts,” said Attorney General Josh Stein. “Now, this settlement would allow them to continue to profit off of these fees at a time when so many North Carolinians are struggling to make ends meet. This settlement is unlawful, and I’ll do everything in my power to fight it.”

For years, PHH charged nearly one million homeowners an illegal fee — ranging from $7.50 to $17.50 — each time a homeowner made a monthly mortgage payment online or by phone, despite most Americans paying their mortgages one of these two ways. These fees are not authorized in people’s mortgage contracts and PHH does not charge such processing fees for any other customers, including those who pay by check or those who set up automatic debit payments.

Under the terms of the proposed settlement, PHH will not only be permitted to continue to charge these illegal fees, but will be able to increase fees up to $19.50 per month for the remaining life of the loan. For many homeowners, that could be another 20 to 30 years. In exchange, homeowners will receive a paltry, one-time monetary payment, but the settlement would give a portion of that monetary relief to PHH instead of the person if their loans are still serviced by PHH. Further, the proposed settlement seeks to authorize these unlawful fees through an unwritten, mass amendment of the mortgages that would violate North Carolina statutes of frauds laws. The amendment would also evade recording requirements for modified mortgages and enable PHH to avoid state and local recording fees.

A copy of the motion is available here.