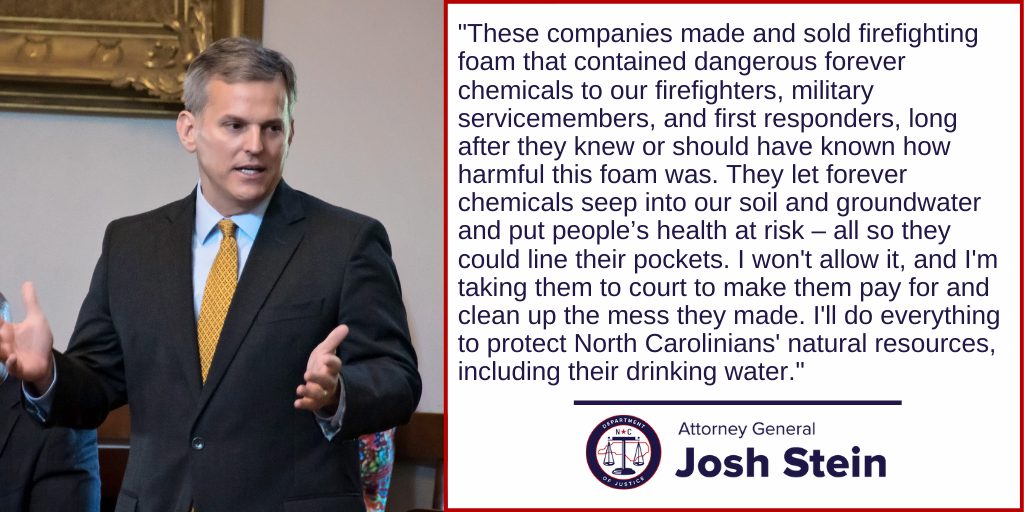 (RALEIGH) Attorney General Josh Stein filed four lawsuits against 14 manufacturers of Aqueous Film Forming Foam (AFFF), a fire suppressant used widely by firefighters, members of the military, and other first responders. AFFF contains PFAS, or forever chemical compounds that are manmade, are toxic, persist in the environment, accumulate in people, and have serious health risks. Attorney General Stein is alleging that the manufacturers of AFFF and the PFAS used in its production – including 3M, Corteva, and DuPont – caused a public nuisance, created a design defect, failed to warn their customers, and fraudulently transferred corporate assets to shield their profits. Attorney General Stein is asking the court to require these manufacturers to pay for investigation into how widespread the damage is, to clean it up, to replace water treatment systems and wells, to restore damaged natural resources, and to monitor water quality into the future.

“These companies made and sold firefighting foam with dangerous forever chemicals to our firefighters, military servicemembers, and first responders, long after they knew or should have known how harmful this foam was,” said Attorney General Josh Stein. “As a result, forever chemicals have seeped into our soil and groundwater and put people’s health at risk – all so these chemical companies could line their pockets. It’s wrong. So I’m taking them to court to make them clean up the mess they made. I’ll do everything to protect North Carolinians’ natural resources, including their drinking water.”

“Every day, we learn more about this toxic class of chemicals,” said Charlotte International Association of Fire Fighters Local 660 President Tom Brewer. “The research and data are clear – these deadly chemicals must be removed from the firefighters’ environment. That’s why I am so pleased to work with Attorney General Stein to address toxic firefighting foams present across our great state.”

AFFF is designed to be mixed with water and sprayed liberally, which leads to it contaminating the soil, groundwater, and natural resources. In these lawsuits, Attorney General Stein alleges that AFFF manufacturers knew or should have known about the toxic nature of PFAS chemicals and how they harmed people, wildlife, and the environment, but they continued to manufacture, market, and sell their products in North Carolina and elsewhere while concealing the risks.

The four cases Attorney General Stein is filing are in connection to the following contaminated sites:

Health problems associated with PFAS include increased risks of cancer, high blood pressure, damage to immune systems, and harm to fetal development. These lawsuits are part of Attorney General Stein’s ongoing investigation into manufacturers responsible for PFAS contamination in North Carolina. The investigation may result in additional legal action.

A copy of the Charlotte-Douglas International Airport complaint is available here.

A copy of the Charlotte Police and Fire Training Academy complaint is available here.

A copy of the Seymour-Johnson Air Force Base complaint is available here.

A copy of the Stanly County Airport base is available here.