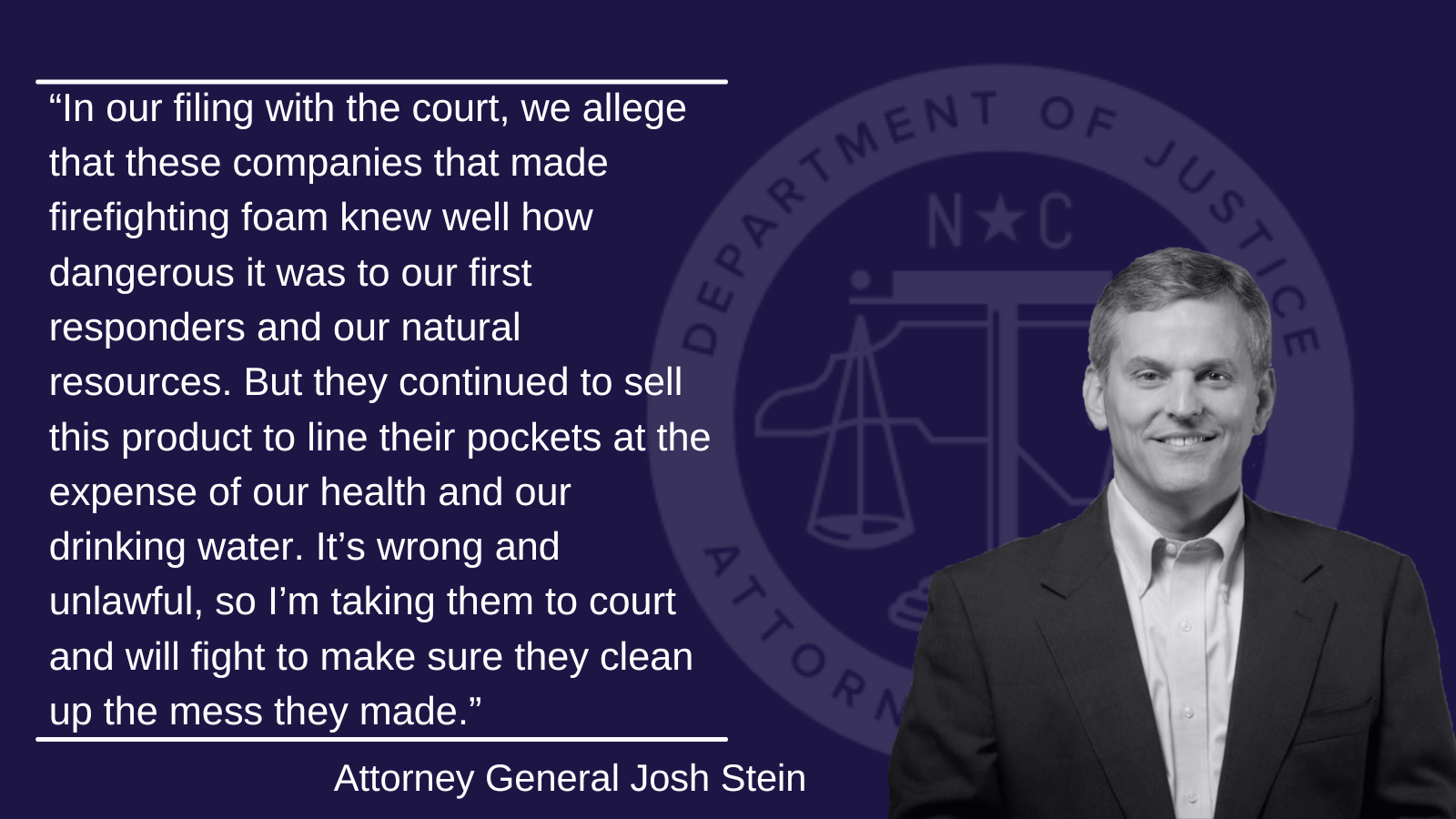 (RALEIGH) Attorney General Josh Stein today filed two new lawsuits against manufacturers of Aqueous Film Forming Foam (AFFF), a fire suppressant that contains PFAS, and the companies that produce the PFAS-containing components in AFFF, including DuPont, Chemours, and 3M. The first lawsuit relates to contamination at the Piedmont-Triad International Airport and the second lawsuit relates to contamination at Marine Corps Base Camp Lejeune and Marine Corps Air Station New River.

“In our filing with the court, we allege that these companies that made firefighting foam knew well how dangerous it was to our first responders and our natural resources,” said Attorney General Josh Stein. “But they continued to sell this product to line their pockets at the expense of our health and our drinking water. It’s wrong and unlawful, so I’m taking them to court and will fight to make sure they clean up the mess they made.”

These lawsuits are part of Attorney General Stein’s ongoing investigation into companies responsible for contaminating North Carolina’s natural resources with PFAS, forever chemicals that are toxic and build up in the environment and in humans. Last November, he filed four lawsuits against 14 companies over toxic firefighting foam. PFOA and PFOS are two types of PFAS chemicals widely used in firefighting foam and associated with suppressing immune systems, increased risk of childhood infections, high cholesterol, thyroid disease, cancer, and other illnesses.

AFFF is designed to be mixed with water and sprayed liberally, but can seep into the soil and groundwater without effective precautionary measures. At the Piedmont-Triad International Airport, groundwater samples have shown the concentrations of PFOS reaching 8,000 part per trillion (ppt), orders of magnitude above EPA’s recently announced health advisory level. The PFAS contamination from the airport has also migrated offsite and may cause impacts to the surrounding area. Samples from Camp Lejeune and Marine Corps Air Station New River showed PFOA contamination over 25,000 ppt.

Attorney General Stein’s broader investigation into PFAs is ongoing and may result in additional lawsuits.