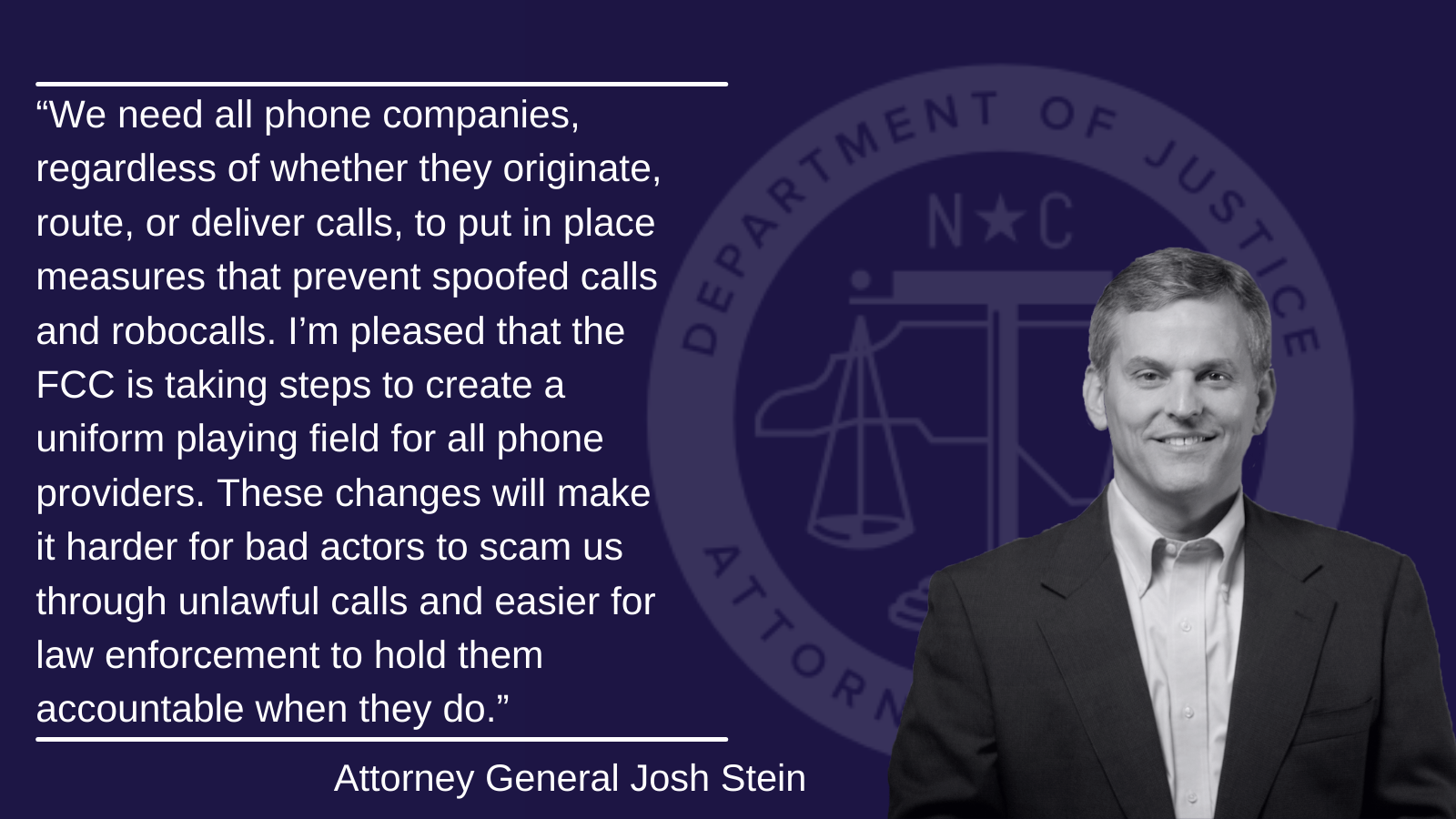 “We need all phone companies, regardless of whether they originate, route, or deliver calls, to put in place measures that prevent spoofed calls and robocalls,” said Attorney General Josh Stein. “I’m pleased that the FCC is taking steps to create a uniform playing field for all phone providers. These changes will make it harder for bad actors to scam us through unlawful calls and easier for law enforcement to hold them accountable when they do.”

Illegal robocalls cost consumers, law enforcement, and the telecom industry approximately $13.5 billion every year. Often, these calls originate from overseas scam actors who spoof U.S.-based phone numbers, and the FCC recently required the phone companies that let these calls onto the U.S. telephone network to do more to keep them out. The FCC is now proposing expanding many of these rules to those few phone companies that, although largely invisible to the public, are exclusively responsible for routing these fraudulent and illegal calls across the U.S. phone network, regardless of where the calls originate.

In their letter, Attorney General Stein and the coalition support the FCC’s proposal to extend the implementation of STIR/SHAKEN, a caller ID authentication technology that helps prevent spoofed calls, to all “intermediate” phone providers in the United States. Right now, only providers that originate call traffic are required to implement STIR/SHAKEN. The coalition also urges the FCC to require providers to adopt these protections and additional measures to cut down on illegal and fraudulent robocalls, including responding to law enforcement traceback requests within 24 hours and blocking illegal traffic, as soon as possible. If all telecom companies have the same robocall mitigation practices, bad actors will not be able to exploit inconsistencies among providers and law enforcement will be better able to identify and prosecute the bad actors who try profit from illegal robocalls.

In addition to this letter, Attorney General Stein is leading nationwide efforts to cut down on illegal robocalls. He led the formation of a nationwide Anti-Robocall Litigation Task Force of 50 attorneys general to investigate and take legal action against telecommunications companies bringing foreign robocalls into the United States and filed a pathbreaking lawsuit against a gateway service provider for routing more than 65 million calls to North Carolina.