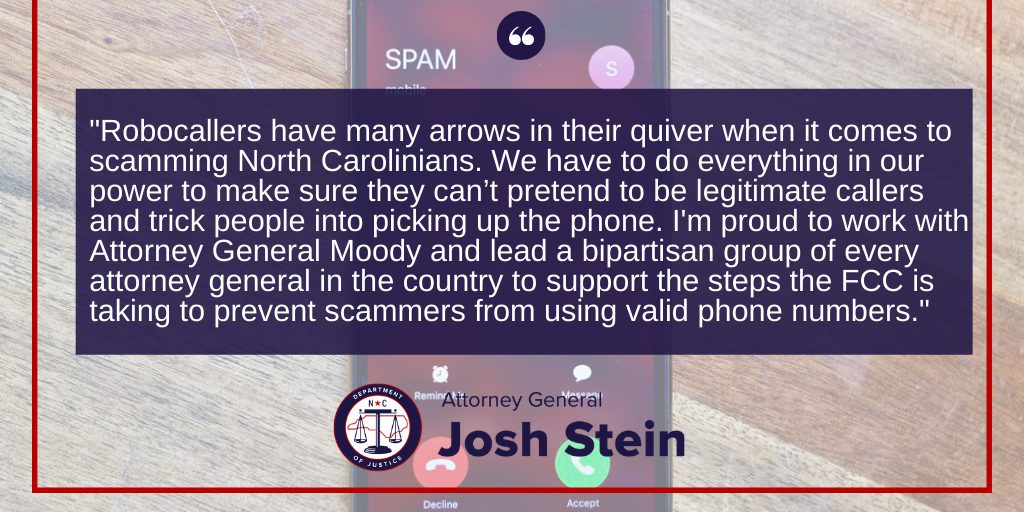 “Robocallers have too many arrows in their quiver when it comes to scamming North Carolinians,” said Attorney General Josh Stein. “We have to do everything in our power to make sure they can’t pretend to be legitimate callers and trick people into picking up the phone. I’m proud to work with Attorney General Moody and lead a bipartisan group of every attorney general in the country to support the steps the FCC is taking to prevent scammers from using valid phone numbers.”

Earlier this year, phone companies were required to implement STIR/SHAKEN – caller ID authentication technology to combat spoofing by ensuring that telephone calls originate from verified numbers. Because the technology prevents robocallers from spoofing phone numbers, scam robocalls have dropped by 29 percent since June as the phone industry continues to put STIR/SHAKEN into effect.

The attorneys general support the FCC’s proposals to implement a more thorough application, review, and monitoring process for phone companies that request direct access to phone numbers and to require these companies to verify their customers’ identities to help keep the numbers from being sold, leased, or rented to illegal robocallers. This includes limiting the use of both temporary phone numbers for trial customers and untraceable payment mechanisms.

Attorney General Stein negotiated the Anti-Robocall Principles in 2019, an agreement between 51 attorneys general and 15 phone companies to reduce illegal robocalls and to identify the robocallers and providers that initiate and route illegal and fraudulent calls to consumers. The principles include commitments from the companies to implement call blocking and labeling technology, to confirm the identity of customers with “Know-Your-Customer” initiatives, and to assist law enforcement in its investigations.