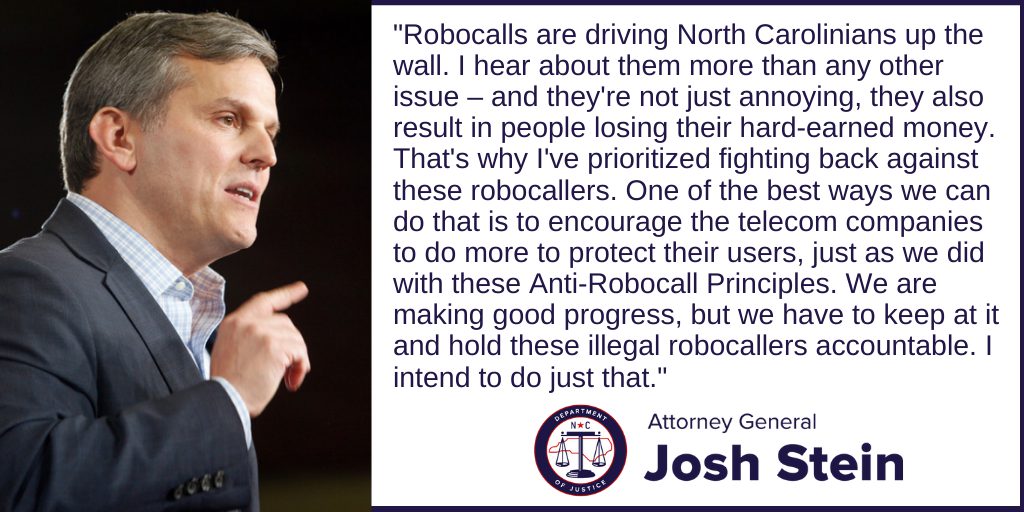 (RALEIGH) Attorney General Josh Stein, who has made fighting robocalls a top priority, today released an update on telecom companies’ progress in implementing the Anti-Robocall Principles he negotiated in 2019. Since September 2019, companies that agreed to these Principles have identified more than 52 billion spam or spoofed numbers calls, authenticated the caller ID numbers of hundreds of billions of calls, and blocked more than 32.5 billion spam, spoofed, or illegal calls.

There is more work to do, however. Already this year, 391,453 Americans have filed reports with the FTC about robocalls, reporting total losses of at least $356 million. These numbers underscore the need to continue to fight back against the scourge of robocalls.

“Robocalls are driving North Carolinians up the wall,” said Attorney General Josh Stein. “I hear about them more than any other issue – and they’re not just annoying, they also result in people losing their hard-earned money. That’s why I’ve prioritized fighting back against these robocallers. One of the best ways we can do that is to encourage the telecom companies to do more to protect their users, just as we did with these Anti-Robocall Principles. We are making good progress, but we have to keep at it and hold these illegal robocallers accountable. I intend to do just that.”

The Principles required companies to:

Industry traceback investigations and governmental enforcement actions will continue. We ask the public to help bolster investigations in North Carolina by reporting your robocalls to www.ncdoj.gov/norobo or via 1-844-8-NOROBO.