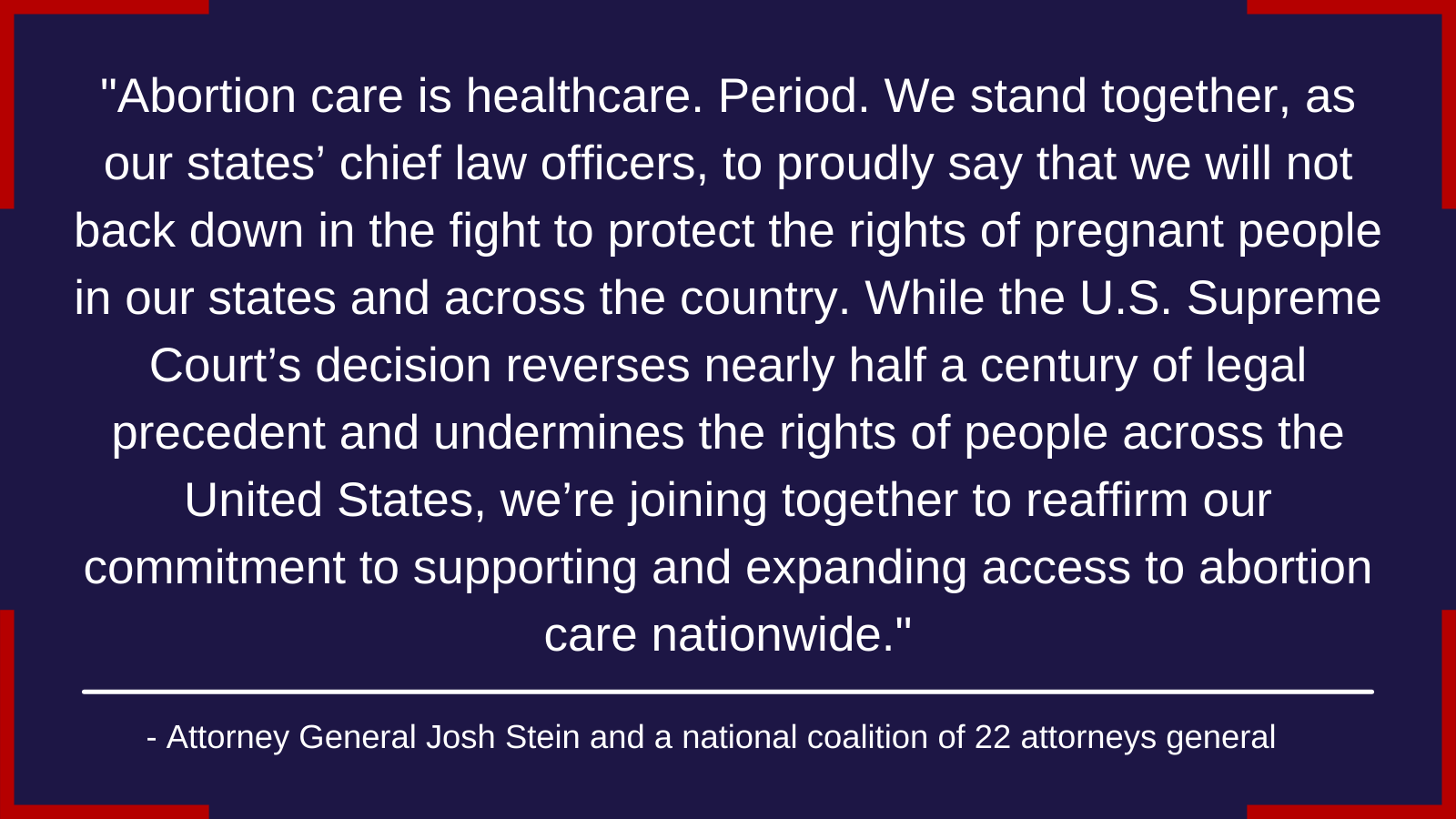 Despite U.S. Supreme Court decision, national coalition of 22 attorneys general emphasize that abortion remains safe and legal in states across the country

(RALEIGH) Attorney General Josh Stein and a national coalition of 22 attorneys general today issued a joint statement reaffirming their commitment to supporting and expanding access to abortion care. Despite the U.S. Supreme Court decision in Dobbs v. Jackson Women’s Health Organization, access to safe and legal abortion remains robustly protected in numerous states across the country, including in North Carolina and the coalition states.

“Abortion care is healthcare. Period. We stand together, as our states’ chief law officers, to proudly say that we will not back down in the fight to protect the rights of pregnant people in our states and across the country. While the U.S. Supreme Court’s decision reverses nearly half a century of legal precedent and undermines the rights of people across the United States, we’re joining together to reaffirm our commitment to supporting and expanding access to abortion care nationwide.

“While this is a perilous moment for our nation, it is a moment that calls for action. Our promise to our residents is simple: We’ll never stop defending your rights. Regardless of the decision in Dobbs, broad access to abortion remains protected in states that recognize reproductive freedom, such as ours. We refuse to go back to the days of politicians trying to tell people what to do with their bodies. When it comes to abortion care, it’s your body and your right to choose. Nobody else gets to make those decisions.

“For generations, Americans have relied on the existence of a constitutional right to abortion to make deeply personal decisions about their lives, their futures, and their families. As a result of the decision in Dobbs, people across the nation are now confronted with the prospect of having to travel from their homes to our states to seek access to the fundamental healthcare to which they should be entitled. For those unable to make the journey, laws banning abortion in their home states will lead to poorer health outcomes and reduced socioeconomic opportunities. Those harms will fall disproportionately on people of color and people with fewer resources, further perpetuating our nation’s historical inequities.

“Ultimately, what harms people in some states harms us all. The future and well-being of our nation is intrinsically tied to the ability of our residents to exercise their fundamental rights, including the right to liberty, privacy, and access to abortion care. If you seek access to abortion and reproductive healthcare, we’re committed to using the full force of the law to support you. You have our word. We will continue to use all legal tools at our disposal to fight for your rights and stand up for our laws. We will support our partners and service providers. Together, we will persist.”