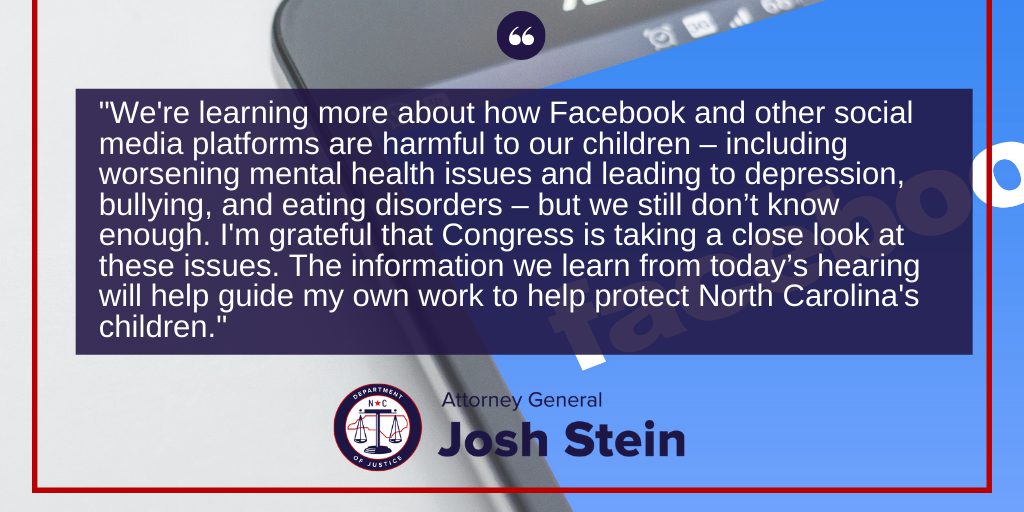 (RALEIGH) Attorney General Josh Stein and a bipartisan coalition of 52 attorneys general expressed strong support for U.S. Senate hearings about youth social media use and the safety concerns for children and teens using social media. Attorney General Stein is responsible for enforcing North Carolina’s consumer protection laws and is deeply concerned about the ways in which Facebook and other social media platforms impact young people’s health and well-being.

“We’re learning more about how Facebook and other social media platforms are harmful to our children – including worsening mental health issues and leading to depression, bullying, and eating disorders – but we still don’t know enough,” said Attorney General Josh Stein. “I’m grateful that Congress is taking a close look at these issues. The information we learn from today’s hearing will help guide my own work to help protect North Carolina’s children.”

In their letter to the U.S. Senate Committee on Commerce, Science, and Transportation’s Subcommittee on Consumer Protection, Product Safety, and Data Security, the attorneys general note that the hearings are important to get critical information about the business practices that social media companies are using to gain the attention of more young people on their platforms. Recent research from Facebook’s own internal studies showing that social media is inflicting harm—in the form of increased mental distress, bullying, suicide, and other self-harm—on a significant number of kids has prompted significant concerns.

In May, Attorney General Stein and a bipartisan group of 44 attorneys general called on Facebook to abandon its plans to launch a version of Instagram for children under 13, citing serious concerns about the harm that social media poses for young people. Facebook announced last week that it had put the project on hold.