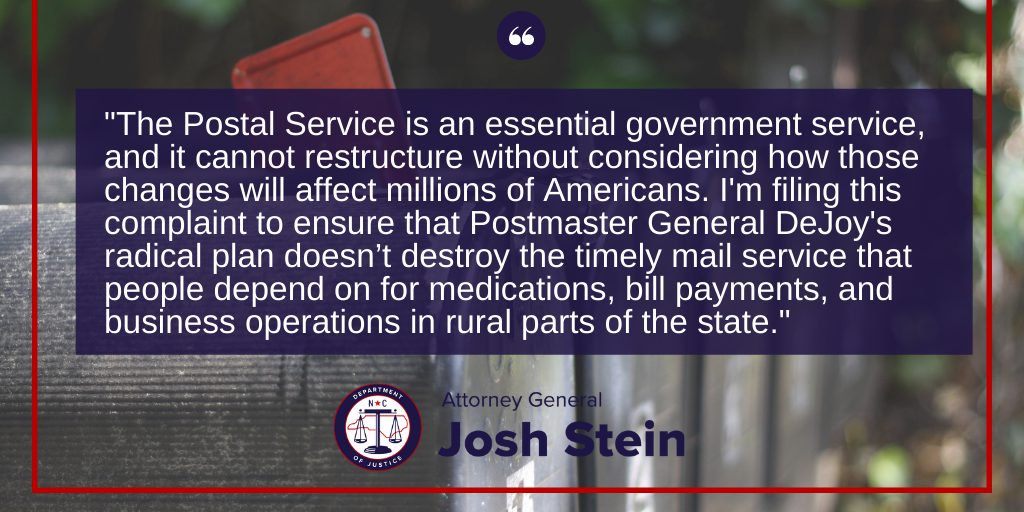 (RALEIGH) Attorney General Josh Stein today filed a complaint against the U.S. Postal Service with the Postal Regulatory Commission over Postmaster General Louis DeJoy’s 10-year Postal Service plan. Attorney General Stein and a coalition of 20 attorneys general assert that DeJoy adopted the plan without first obtaining an advisory opinion from the commission, as required by law.

“The Postal Service is an essential government service, and it cannot restructure without considering how those changes will affect millions of Americans,” said Attorney General Josh Stein. “I’m filing this complaint to ensure that Postmaster General DeJoy’s radical plan doesn’t destroy the timely mail service that people depend on for medications, bill payments, and business operations in rural parts of the state.”

The 10-year plan would undermine the Postal Service, including changes that would enact slower service standards for first-class mail and other packages, change the location of post offices, and adjust rates. The plan would slow down USPS standard delivery for 30 percent of mail from three days to five days, increase the price of each piece of mail by six to nine percent, and put these changes in place without doing anything to effectively address the larger Postal Service budget deficit.

The Postal Regulatory Commission is an independent federal agency that has oversight over the Postal Service’s operations. Federal law requires the Postal Service to go to the Commission whenever it makes a change to postal services that will affect the entire country. The attorneys general contend that DeJoy failed to do so, and without the proper review, DeJoy’s plan could lead to future problems with mail delivery. The attorneys general are requesting that the Commission order the Postal Service to request a review of the full extent of the ten-year plan, affording the States and the public an opportunity to provide comment.