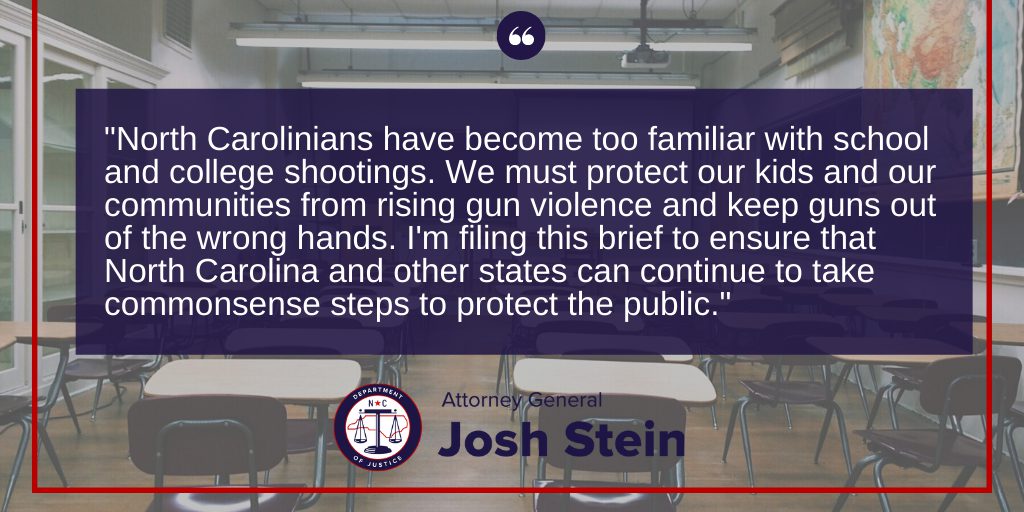 (RALEIGH) Attorney General Josh Stein today filed a friend-of-the-court brief arguing that states have the right to enact reasonable, age-based gun protections to keep people safe and prevent gun violence. Attorney General Stein joined a coalition of 20 attorneys general defending a Pennsylvania law that limits the issuance of concealed-carry licenses to people ages 21 and up in Lara v. Commissioner of the Pennsylvania State Police in the U.S. Court of Appeals for the Third Circuit. North Carolina has a similar law.

“North Carolinians have become too familiar with school and college shootings,” said Attorney General Josh Stein. “We must protect our kids and our communities from rising gun violence and keep guns out of the wrong hands. I’m filing this brief to ensure that North Carolina and other states can continue to take commonsense steps to protect the public.”

The trial court upheld Pennsylvania’s law, holding that laws regulating the sale of firearms to young people are longstanding and constitutional. In their brief, the attorneys general argue that the Second Amendment gives states the ability to enact sensible public safety measures, including limiting the ability of people younger than 21 to carry concealed firearms in public. Although regulations differ based on each state’s needs, virtually every state and the District of Columbia have imposed some age-based restrictions on the sale or use of firearms, and more than 30 states and the District of Columbia, including North Carolina, have enacted statutes that prohibit people younger than 21 from carrying concealed firearms in public. Similarly, courts across the country consistently have upheld age-based regulations, noting that the goal is to deter crime and promote public safety.