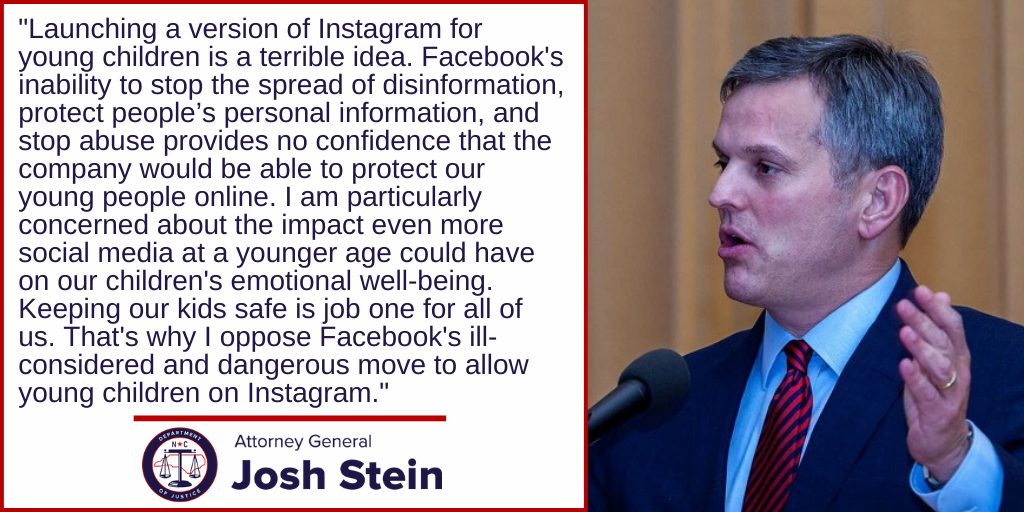 (RALEIGH) Attorney General Josh Stein today urged Facebook to abandon its plans to launch a version of Instagram for children under 13, citing serious concerns about the harm that social media poses for young people.

“Launching a version of Instagram for young children is a terrible idea,” said Attorney General Stein. “Facebook’s inability to stop the spread of disinformation, protect people’s personal information, and stop abuse provides no confidence that the company would be able to protect our young people online. I am particularly concerned about the impact even more social media at a younger age could have on our children’s emotional well-being. Keeping our kids safe is job one for all of us. That’s why I oppose Facebook’s ill-considered and dangerous move to allow young children on Instagram.”

In a letter to Facebook CEO Mark Zuckerberg, Attorney General Stein and a bipartisan coalition of 44 attorneys general contend that social media is detrimental for children and that Facebook has historically failed to protect children on its platforms.

Their reasons for concern include:

Attorney General Stein has been leading efforts in North Carolina to protect children online. He drafted and championed the SAFE Child Act, which became law in 2019 and helps protect children from abuse wherever they are, including social networking sites. The law bars high-risk sex offenders from contacting anyone under the age of 16 using social media or social networking platforms, collecting information about anyone under the age of 16, or violating social media platform policies.