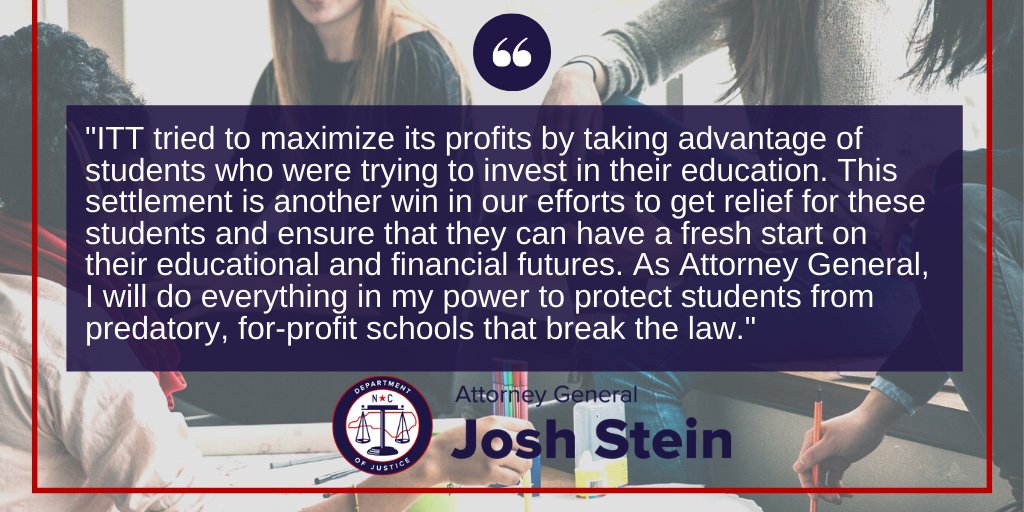 1,500 North Carolina students will get more than $12 million in financial relief

“ITT tried to maximize its profits by taking advantage of students who were trying to invest in their education,” said Attorney General Josh Stein. “This settlement is another win in our efforts to get relief for these students and ensure that they can have a fresh start on their educational and financial futures. As Attorney General, I will do everything in my power to protect students from predatory, for-profit schools that break the law.”

Students do not need to do anything to receive to this debt relief – forthcoming notices from PEAKS will explain the relief and their rights under the settlement. Students may direct questions to PEAKS at customerservice@peaksloans.com or 866-747-0273, or the Consumer Financial Protection Bureau at https://www.consumerfinance.gov/ask-cfpb/ or (855) 411-2372.

ITT filed for bankruptcy in 2016 amid investigations by state attorneys general and following action by the U.S. Department of Education to restrict ITT’s access to federal student aid. ITT had operated campuses in Cary, Charlotte, Durham, and High Point in North Carolina. As noted in today’s settlement, ITT developed a plan with PEAKS to offer students temporary credit to cover the gap in tuition between federal student aid and the full cost of the education. ITT offered this temporary credit even when it knew that students would not be able to repay the credit when it became due in nine months.

When the temporary credit came due and students could not repay it, ITT pressured and coerced students into accepting loans from PEAKS that carried very high interest rates. Many students were from low-income backgrounds and were left with the choice of enrolling in PEAKS loans or dropping out and losing any benefit of the credits they had earned. More than 80 percent of borrowers who took on a PEAKS loan have defaulted or are expected to default on their loan, both because of the high cost of the loan and because ITT graduates have had little success getting jobs that pay well enough to make repayment possible. The defaulted loans continue to affect students’ credit ratings and are usually not dischargeable in bankruptcy.

Under the settlement, PEAKS has agreed that it will forgo collection of the outstanding loans and cease doing business. PEAKS must also supply credit reporting agencies with information to update credit information for affected borrowers.