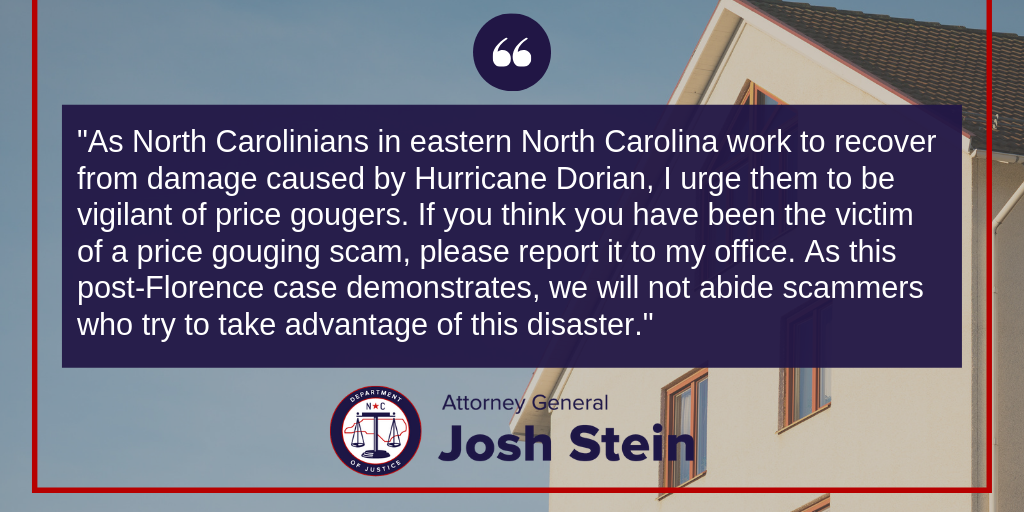 “As North Carolinians in eastern North Carolina work to recover from damage caused by Hurricane Dorian, I urge them to be vigilant of price gougers,” said Attorney General Josh Stein. “If you think you have been the victim of a price gouging scam, please report it to my office. As this post-Florence case demonstrates, we will not abide scammers who try to take advantage of this disaster.”

North Carolina’s price gouging law is currently in effect after Gov. Roy Cooper declared a state of emergency for Hurricane Dorian. People can report potential price gouging by calling 1-877-5-NO-SCAM or by filing a complaint at https://ncdoj.gov/file-a-complaint/price-gouging/.

After Hurricanes Michael and Florence devastated North Carolina in 2018, Attorney General Stein brought seven lawsuits against 22 defendants under North Carolina’s price gouging statute. He has obtained eight judgments against 17 defendants, including a $274,000 settlement that was one of the largest price gouging settlements in the department’s history. The Attorney General’s Office has won more than $725,000 in these judgments, including:

A copy of the judgment is here.