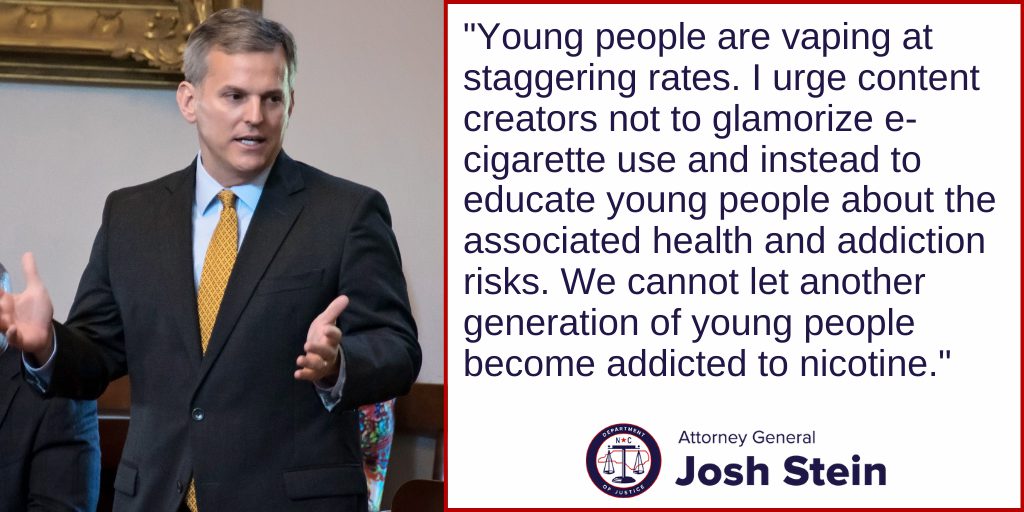 “Young people are vaping at staggering rates,” said Attorney General Josh Stein. “I urge content creators not to glamorize e-cigarette use and instead to educate young people about the associated health and addiction risks. We cannot let another generation of young people become addicted to nicotine.”

Tobacco is the number one preventable killer in the United States, with more than 480,000 Americans dying from tobacco-related diseases every year. While tobacco use among teens dropped from 28 percent to just above 5 percent from 2000 to 2017, the rise of e-cigarettes has led the number of high schoolers using tobacco products back up to nearly 30 percent and 7 percent among middle schoolers. Health risks include nicotine addiction, nicotine poisoning, heart disease, lung disease, and behavior changes.

In the race to launch new platforms, provide more content, and capture audiences, many streaming companies failed to consider the effects that easy access to movies and programs with tobacco imagery would have on children. Studies indicate that children who watch content with tobacco imagery are significantly more likely to begin vaping than those who are not exposed to such content, with the likelihood of using e-cigarettes increasing with higher levels of exposure to such content.

Attorney General Stein has been leading the fight against the national teen vaping epidemic. He filed the first state lawsuit against e-cigarette manufacturer Juul in May 2019 for aggressively marketing their products to young people and misrepresenting the dangers of the nicotine in e-cigarettes. He also filed lawsuits against eight additional e-cigarette companies in August 2019 for aggressively targeting children and lax age verification processes. The courts barred most of these companies from selling any e-cigarette products in North Carolina for the duration of the lawsuits.

More on Attorney General Stein’s work on the teen vaping epidemic and e-cigarettes: