The elimination of sexual assault must involve a dedicated effort.

The Survivor Act mandates submitting sexual assault kits for testing to an accredited lab for local law enforcement agencies. Doing so will deliver justice to more victims and prevent backlogs from occurring in the future. The legislation also provides $6 million in funding over the next two years to address the current backlog of sexual assault kits in local law enforcement custody across the state. 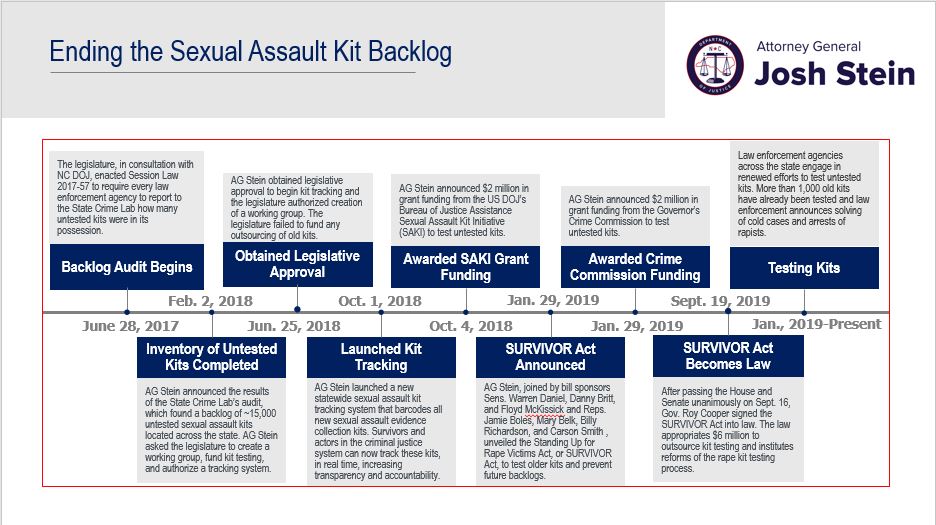 We work with anti-sexual violence partners (such as the North Carolina Coalition Against Sexual Assault) to educate others about solutions to end sexual assault. The Attorney General has hosted conversations about these issues on college campuses across North Carolina.

Sexual assault is unacceptable and too common. It can happen to or be committed by anyone, regardless of religion, race, community, or any other factor.

Sexual assault occurs every 92 seconds in our country. One in six women is a victim of attempted or completed rape. That statistic is higher on college campuses. While any person can be a victim of sexual assault, women are disproportionally at risk.

As a society, we are beginning to speak more openly and honestly about the prevalence of sexual abuse and assault, as well as the related issue of harassment. Americans are having vital conversations about the work we must do to ensure that our workplaces, homes, and communities are free of sexual violence.

Sexual assault and rape are against the law in North Carolina. Victims of rape and sexual assault have the right to take legal action to end the abuse. Attorney General Stein works to hold perpetrators of sexual violence responsible for the crimes they commit, and provide some measure of justice for survivors.

We do this through our State Crime Lab, using DNA and forensic biology. Establishing links between alleged perpetrators of a crime and the victims. Our experts conduct analysis of evidence and test sexual assault kits to get justice for survivors and victims.

You can find the Sexual Assault Kit tracker here.

Attorneys at the Department of Justice also work to uphold the convictions of those who commit assault when those cases are in North Carolina’s appellate courts. The Department’s Public Protection Section, along with the NC Justice Academy and State Crime Lab are working to provide North Carolina communities with training and technical assistance that advance best practices in investigation and prosecution of sexual assault cases.

The North Carolina Department of Justice’s Public Protection Section supports survivors of sexual violence by providing information about their legal rights and protections.

We operate the Address Confidentiality Program(ACP) for victims and survivors of violence and abuse. If you are a victim, you can enroll in ACP. This program will help keep your new address safe from possible or former abusers. For more information, call us at (919) 716-6785 or email acp@ncdoj.gov. This program can be one tool, among many, to help a person move from victim to survivor.

More information for victims can be found here.

If you or someone you know needs assistance, call the National Sexual Assault Hotline at (800) 656-4673.

Friends and family are often the first to learn or notice that someone may have been the victim of sexual assault and violence.

Here are some common signs: