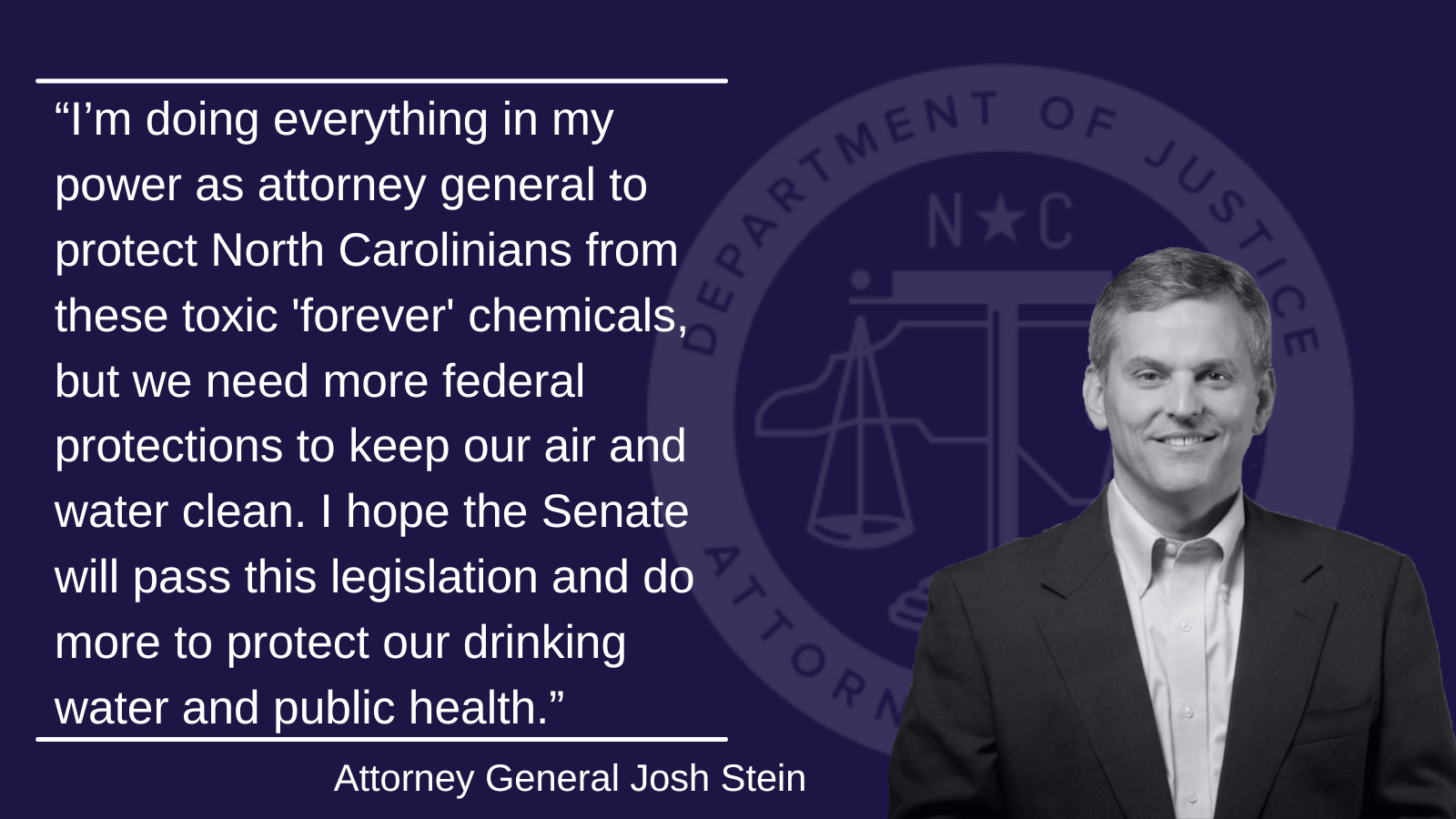 “I’m doing everything in my power as attorney general to protect North Carolinians from these toxic ‘forever’ chemicals, but we need more federal protections to keep our air and water clean,” said Attorney General Josh Stein. “I hope the Senate will pass this legislation and do more to protect our drinking water and public health.”

PFAS are man-made chemicals that have been used to produce countless consumer products since the 1940s, including textiles with Scotchgard™; Teflon™ products, including non-stick cookware; food packaging; and waterproof clothing. Firefighting-foam-containing PFAS has also been used for decades by the U.S. military, airports, industrial facilities, and local fire departments. PFAS are estimated to be detectable in the blood stream of 99 percent of the U.S. population. These “forever chemicals” are highly toxic to humans and animals and extremely resistant to degradation in the environment.

In a letter, Attorney General Stein and a coalition of 18 attorneys general urged Senate leaders to provide the U.S. Department of Defense (DoD) with the tools necessary to conduct remediation and removal of PFAS contamination to protect public health and the environment. The attorneys general urge the Senate to adopt additional protections that appear in the House NDAA bill, which was recently passed by a bipartisan majority. These provisions include mandating that DoD cleanups of PFAS contamination meet the most stringent standards, prohibiting the procurement of PFAS-contacting firefighting equipment after 2025, establishing a program to test for PFAS in schools operated by DoD and install safe and effective filtration systems, and requiring DoD to keep Congress updated on its steps to protect against PFAS exposure.

Attorney General Stein has long been leading efforts to hold accountable polluters for PFAS contamination in North Carolina. In 2020, he launched a formal investigation into the companies responsible for PFAS contamination in North Carolina. As part of that investigation, he filed a lawsuit against DuPont and Chemours for the damage their toxic chemicals have caused to natural resources and drinking water in the Cape Fear River Basin and its communities. He’s also filed six lawsuits against 14 companies that manufacture AFFF, a fire suppressant used by first responders that contains PFAS. Attorney General Stein’s broader investigation into PFAS contamination is ongoing.