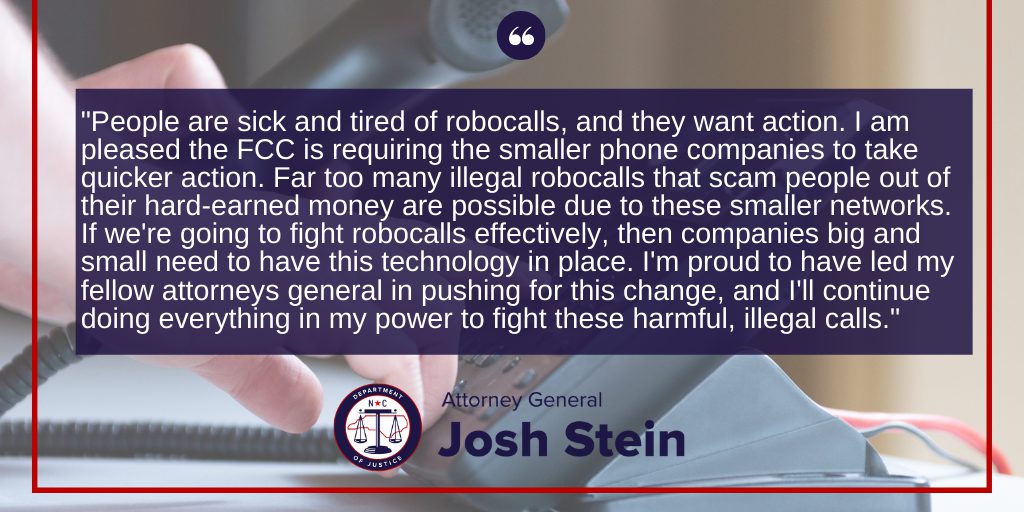 (RALEIGH) Attorney General Josh Stein today praised the FCC for shortening the time that smaller telephone companies have to implement caller ID authentication technology to help cut down on illegally-spoofed robocalls. In August, Attorney General Stein co-led a bipartisan group of 51 attorneys general urging the FCC to move up this deadline for smaller companies to adopt STIR/SHAKEN, which prevents callers from spoofing their numbers.

“People are sick and tired of robocalls, and they want action,” said Attorney General Josh Stein. “I am pleased the FCC is requiring the smaller phone companies to take quicker action. Far too many illegal robocalls that scam people out of their hard-earned money are possible due to these smaller networks. If we’re going to fight robocalls effectively, then companies big and small need to have this technology in place. I’m proud to have led my fellow attorneys general in pushing for this change, and I’ll continue doing everything in my power to fight these harmful, illegal calls.”

Under the TRACED Act, which became law in 2019, phone companies are required to implement STIR/SHAKEN technology on their networks. Large companies were required to implement the technology by June 2021, and smaller phone companies were originally given an extension until June 2023. However, many smaller companies are responsible for allowing a large number of illegal robocalls to originate on their networks. The FCC has now shortened the deadline to June 30, 2022, after the state attorneys general urged it to do so.