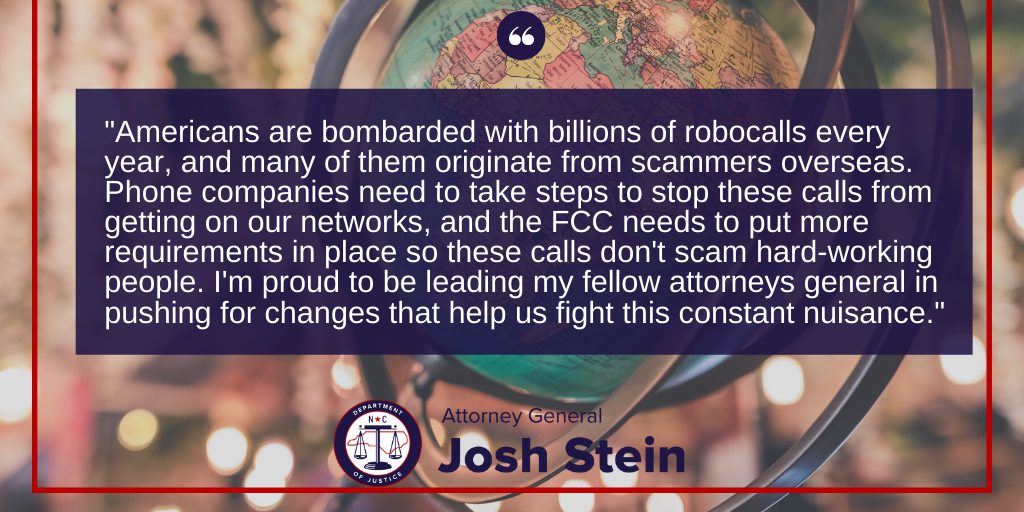 “Americans are bombarded with billions of robocalls every year, and many of them originate from scammers overseas,” said Attorney General Josh Stein. “Phone companies need to take steps to stop these calls from getting on our networks, and the FCC needs to put more requirements in place so these calls don’t scam hard-working people. I’m proud to be leading my fellow attorneys general in pushing for changes that help us fight this constant nuisance.”

The 51 attorneys general are calling for the FCC to require gateway providers – the companies that allow foreign calls into the United States – to take steps to reduce how easily robocalls have been able to enter the U.S. telephone network, including implementing STIR/SHAKEN, a caller ID authentication technology that helps prevent spoofed calls. Gateway providers should be required to implement this technology within 30 days of it becoming a rule to help eliminate spoofed calls and to make sure that international calls that originate from U.S. telephone numbers are legitimate. In December, Attorney General Stein led a coalition of 51 attorneys general in successfully persuading the FCC to shorten by a year the deadline for smaller telephone companies to implement STIR/SHAKEN.

The attorneys general are asking the FCC to require these gateway providers to take additional measures to reduce robocalls, including:

The attorneys general are also encouraging the FCC to require all phone companies to block calls from a gateway provider if it fails to meet these requirements. Illegal robocalls are a scourge – in 2020, Americans lost more than $520 million through robocall scams.