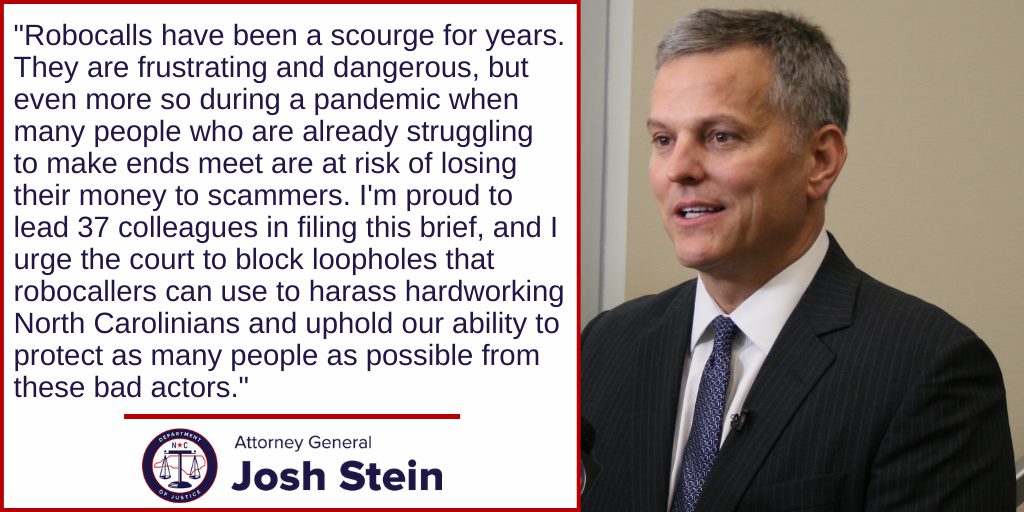 (RALEIGH) Attorney General Josh Stein and Indiana Attorney General Curtis Hill today co-authored and filed an amicus brief in Facebook v. Noah Duguid, a U.S. Supreme Court case that will determine the scope of the protections of the federal Telephone Consumer Protection Act (TCPA). This case is key to states’ ability to protect residents from scammers who use abusive robocall tactics to threaten and scam people out of their money. This is the second U.S. Supreme Court case this year where Attorneys General Stein and Hill have teamed up to protect people from telephone fraud and abuse.

“Robocalls have been a scourge for years,” said Attorney General Josh Stein. “They are frustrating and dangerous, but even more so during a pandemic when many people who are already struggling to make ends meet are at risk of losing their money to scammers. I’m proud to lead 37 colleagues in filing this brief, and I urge the court to block loopholes that robocallers can use to harass hardworking North Carolinians and uphold our ability to protect as many people as possible from these bad actors.”

The TCPA, enacted in 1991, generally prohibits the use of an autodialer or an artificial or pre-recorded voice to make a call to cell phone users. At issue in the case is whether autodialers include any device that can store and dial numbers automatically, or whether autodialers are limited to devices that use a random number generator. In their brief, the attorneys general side with the plaintiff, Noah Duguid, and argue that the TCPA applies to all kinds of devices that store and dial numbers automatically.

Attorney General Stein has been leading national efforts to stop illegal robocallers from bothering and harming North Carolinians. In 2019, he led 51 attorneys general and 12 phone companies to launch the Anti-Robocall Principles, a series of principles the companies agreed to adopt to combat robocalls. In February, he launched the Robocall Report Task Force to encourage North Carolinians to report robocalls online (www.ncdoj.gov/norobo) and through a dedicated robo-report hotline (1-844-8-NO-ROBO). Since the launch of the Robocall Report Task Force, more than 6,000 robocall complaints have been filed with our office.