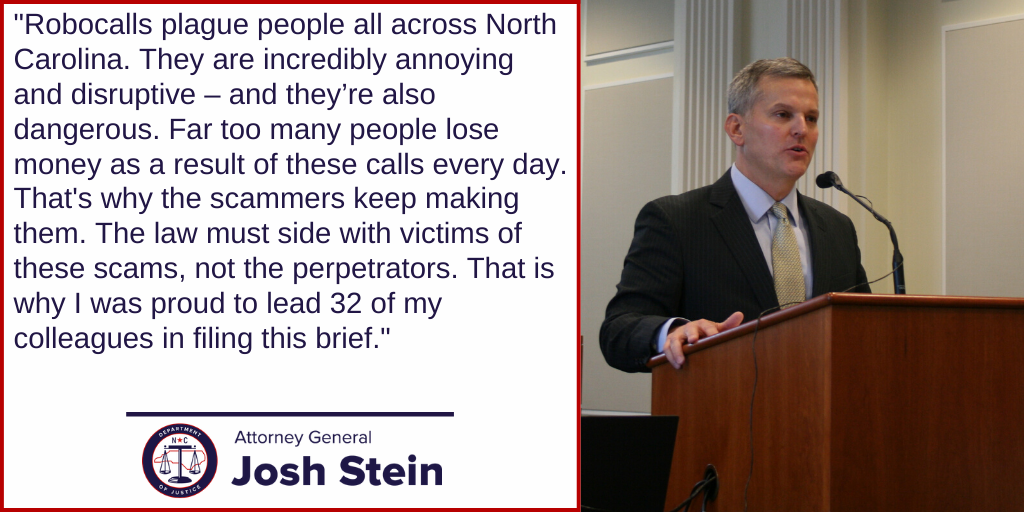 “Robocalls plague people all across North Carolina,” said Attorney General Josh Stein. “They are incredibly annoying and disruptive – and they’re also dangerous. Far too many people lose money as a result of these calls every day. That’s why the scammers keep making them. The law must side with victims of these scams, not the perpetrators. That is why I was proud to lead 32 of my colleagues in filing this brief.”

The TCPA, enacted in 1991, is a critical piece of federal consumer protection legislation allowing states to sue illegal robocallers on their residents’ behalf. A decision in the Fourth Circuit U.S. Court of Appeals recently invalidated a portion of the act, potentially jeopardizing the entire federal robocall ban.

In their brief, Attorney General Stein and a coalition of 32 other states explain that state attorneys general have a strong interest in protecting their citizens from robocalls, which invade personal privacy and are used to perpetuate scams and fraud. The brief further explains that striking down the federal robocall ban would threaten the constitutionality of at least 42 similar state laws.