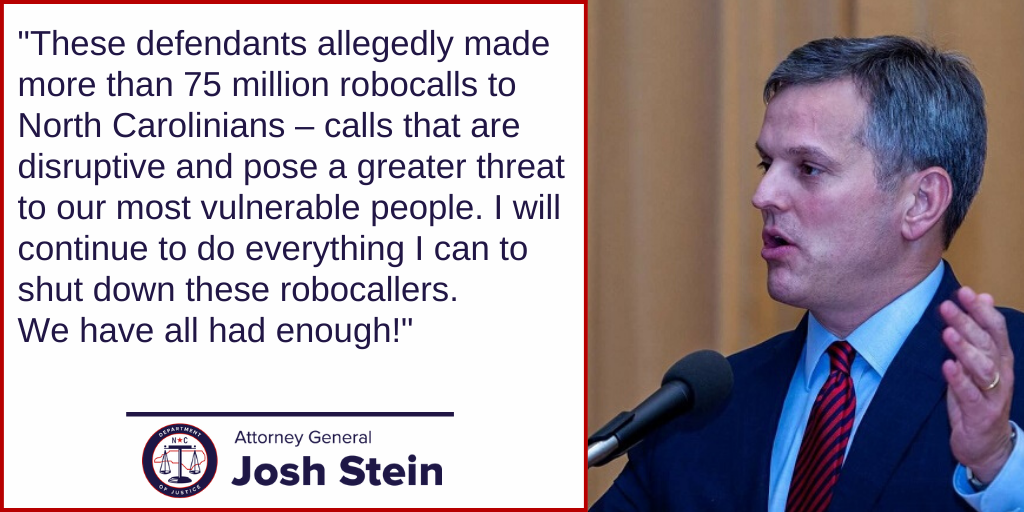 (RALEIGH) Attorney General Josh Stein today filed a complaint against Texas-based Rising Eagle Capital Group LLC and JSquared Telecom LLC for blasting billions of illegal robocalls over the past two years. John Spiller II, owner of the businesses, and his business partner, Jakob Mears, are also named as defendants. The complaint alleges that in 2019 and 2020, the defendants made more than 75 million robocalls to North Carolina phone users, including more than 34 million calls to numbers on the National Do Not Call Registry.

“These defendants allegedly made more than 75 million robocalls to North Carolinians – calls that are disruptive and pose a greater threat to our most vulnerable people,” said Attorney General Stein. “I will continue to do everything I can to shut down these robocallers. We have all had enough!”

Attorney General Stein and six other attorneys general allege in their lawsuit that Rising Eagle and JSquared violated the federal Telephone Consumer Protection Act and various state consumer protection laws. The lawsuit alleges that the companies bombarded phone users with robocalls offering extended car warranties and health care services and illegally engaged in caller ID spoofing in an effort to mislead and defraud victims. They are also accused of targeting phone numbers on the National Do Not Call Registry and of using pre-recorded messages without prior consent of call recipients.

Attorney General Stein has been leading national efforts to stop illegal robocallers from bothering and harming North Carolinians. In 2019, he led 51 attorneys general and 12 phone companies to launch the Anti-Robocall Principles, a series of principles the companies agreed to adopt to combat robocalls. In February, he launched the Robocall Report Task Force to encourage North Carolinians to report robocalls online (www.ncdoj.gov/norobo) and through a dedicated robo-report hotline (1-844-8-NO-ROBO).

The lawsuit, filed in the U.S. District Court for Southern Texas, seeks civil penalties and a permanent injunction to stop the defendants from violating federal and state laws. In addition to the states’ case, the Federal Communications Commission today announced its own legal action against Rising Eagle, JSquared, Spiller, and Mears.