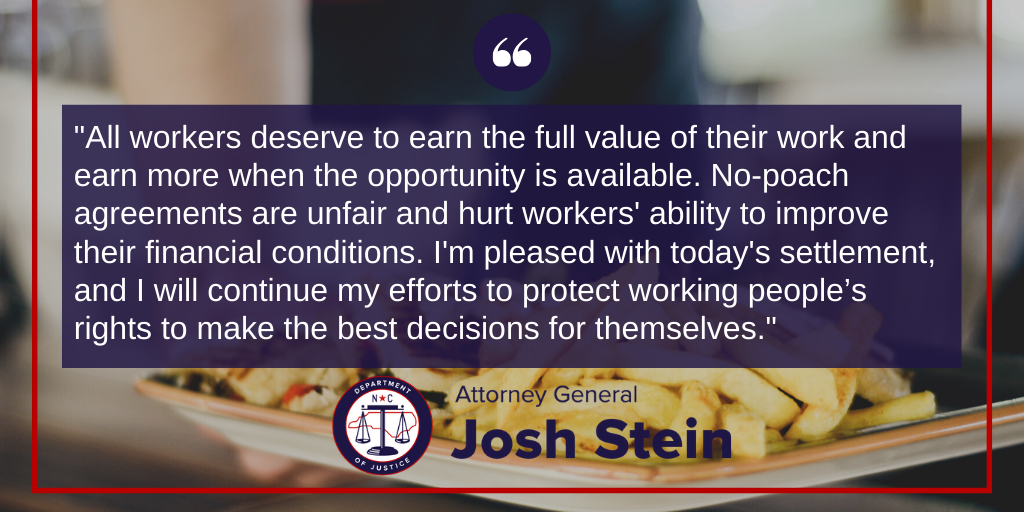 (RALEIGH) Attorney General Josh Stein today announced a multistate settlement with Burger King, Popeye’s, and Tim Horton’s over no-poach agreements, which restrict the right of fast food workers to move from one restaurant chain franchise to another. The three chains, all owned by Restaurant Brands International, will cease using the agreements.

“All workers deserve to earn the full value of their work and earn more when the opportunity is available,” said Attorney General Josh Stein. “No-poach agreements are unfair and hurt workers’ ability to improve their financial conditions. I’m pleased with today’s settlement, and I will continue my efforts to protect working people’s rights to make the best decisions for themselves.”

The attorneys general began their investigation in July 2018 by sending letters to Arby’s, Burger King, Dunkin’ Brands, Five Guys Burgers and Fries, Little Caesars, Panera Bread, Popeye’s Louisiana Kitchen, and Wendy’s requesting documents, including copies of franchise agreements and communications related to no-poach provisions. The attorneys general alleged that no-poach provisions make it difficult for workers to improve their earning potential by moving from one job to another or seeking a higher-paying job at another franchise location, and that many workers are unaware they are subject to these no-poach provisions.

In March 2019, Attorney General Stein and the other attorneys general reached settlements with Dunkin’, Arby’s, Five Guys, Little Caesars, and Panera in which the restaurants agreed to cease using no-poach provisions in their franchise agreements. These franchisors have reported that all franchisees in the settling states amended their franchise agreements to remove the no-poach provisions. In the coming months, states will be visiting stores to ensure notices to employees are properly posted. Wendy’s provided confirmation that it never used no-poach provisions in their contracts with franchisees.