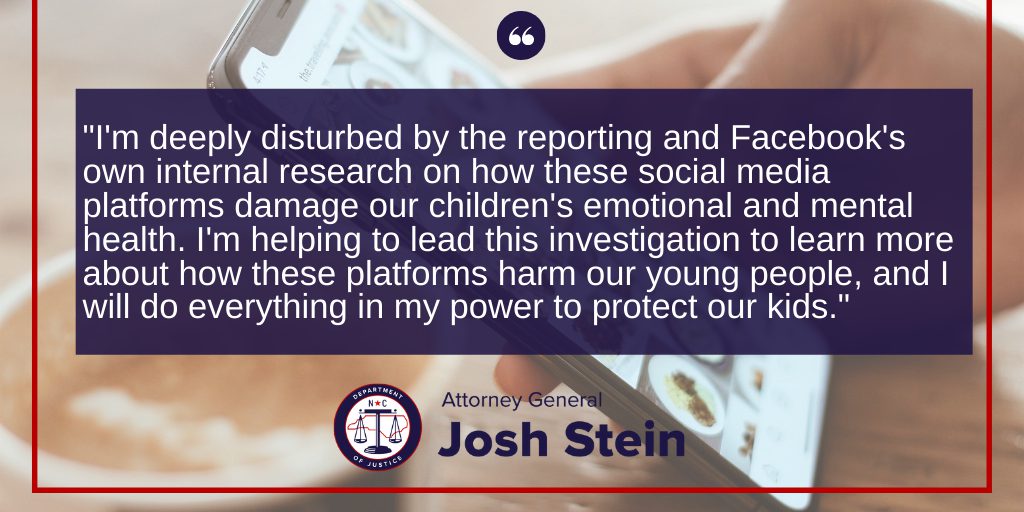 (RALEIGH) Attorney General Josh Stein is helping lead a nationwide investigation into Meta Platforms, Inc., formerly known as Facebook, for providing and promoting its social media platform – Instagram – to children and young adults despite knowing that such use is associated with physical and mental health harms. Attorney General Stein is part of the executive committee of attorneys general examining whether the company violated state consumer protection laws and put the public at risk.

“I’m deeply disturbed by the reporting and Facebook’s own internal research on how these social media platforms damage our children’s emotional and mental health,” said Attorney General Josh Stein. “I’m helping to lead this investigation to learn more about how these platforms harm our young people, and I will do everything in my power to protect our kids.”

The investigation targets, among other things, the techniques utilized by Meta to increase how often and how long young users use the platform and the resulting harms caused by such extended engagement. Today’s announcement follows recent reports revealing that Meta’s own internal research shows that using Instagram is associated with increased risks of physical and mental health harms in young people, including depression, eating disorders, and even suicide. Attorney General Stein has long been concerned about the negative impacts of social media platforms on North Carolina’s children. In May, he was part of a bipartisan coalition of 44 attorneys general that urged Facebook to abandon its plans to launch a version of Instagram for children under the age of 13.