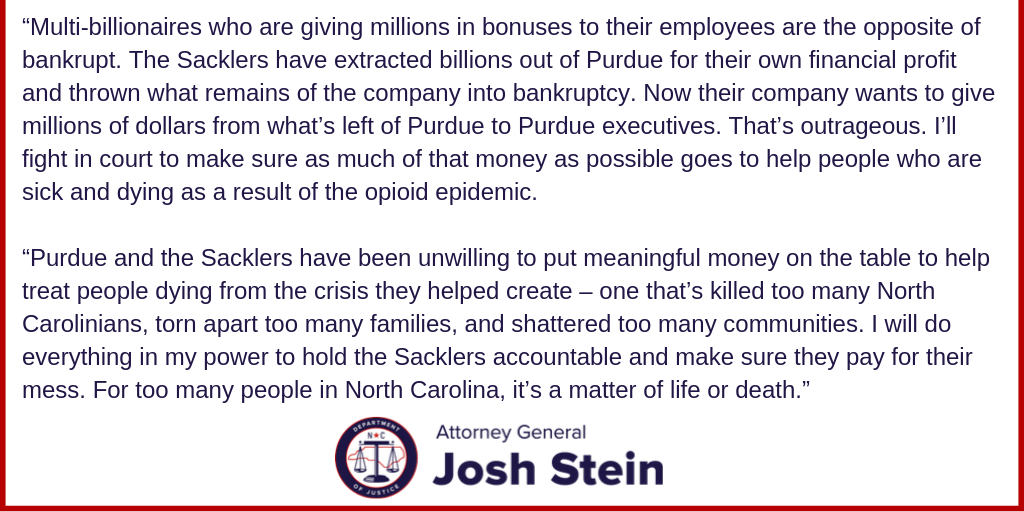 (RALEIGH) Attorney General Josh Stein today filed a formal objection to Purdue Pharma’s move to pay out $38 million in employee bonuses after it filed for bankruptcy two weeks ago and is in the midst of several lawsuits over its role in fueling the opioid epidemic. Attorney General Stein objected to Purdue’s request for authorization for incentive, bonus, and severance plans.

“Multi-billionaires who are giving millions in bonuses to their employees are the opposite of bankrupt. The Sacklers have extracted billions out of Purdue for their own financial profit and thrown what remains of the company into bankruptcy. Now their company wants to give millions of dollars from what’s left of Purdue to Purdue executives. That’s outrageous. I’ll fight in court to make sure as much of that money as possible goes to help people who are sick and dying as a result of the opioid epidemic.

“Purdue and the Sacklers have been unwilling to put meaningful money on the table to help treat people dying from the crisis they helped create – one that’s killed too many North Carolinians, torn apart too many families, and shattered too many communities. I will do everything in my power to hold the Sacklers accountable and make sure they pay for their mess. For too many people in North Carolina, it’s a matter of life or death.”

Attorney General Stein filed a lawsuit against the Sackler family earlier this month.

A copy of the objection is available here.