(RALEIGH) Attorney General Josh Stein today announced the top 10 consumer complaints that his office received in 2018. In the course of investigating the 19,022 complaints submitted to the North Carolina Department of Justice in 2018, NCDOJ secured refunds of more than $3.3 million for consumers.

“There are always scammers trying to trick people into sharing their personal information or giving up their hard-earned money,” said Attorney General Josh Stein. “This behavior isn’t just wrong, it’s illegal. My office will do everything in our power to investigate and resolve consumer complaints for North Carolinians and educate people on how to protect themselves from scams and frauds.”

“Our 2018 annual report highlights the Department’s work to protect North Carolina and its people from crime and fraud,” said Attorney General Stein. “I’m incredibly proud of the work hundreds of NCDOJ colleagues have done to prevent crime, support law enforcement, safeguard consumers, and defend North Carolina, its people, and their constitutional rights.” 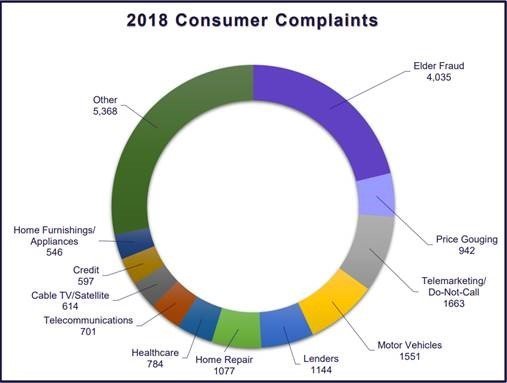 The top 10 consumer complaints received in 2018 are:

North Carolina consumers can visit ncdoj.gov to learn more about ways to protect themselves from scams and fraud. If you believe you or someone you know has been the victim of a scam, file a complaint with our Consumer Protection Division at ncdoj.gov/complaint or by calling 1-877-5-NO-SCAM.