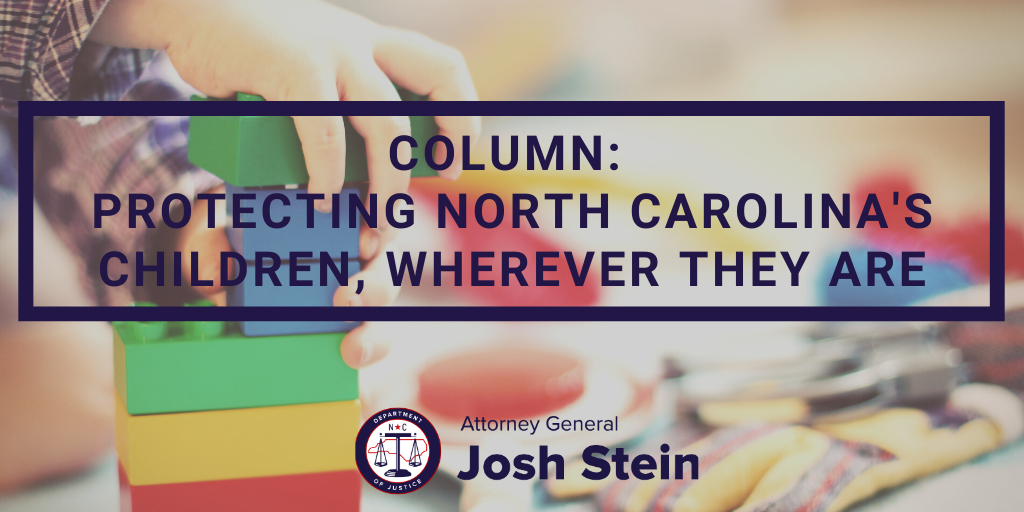 There’s nothing more important than keeping our children safe, regardless of where they are. As we close out this year, I’m incredibly proud that the SAFE Child Act went into effect this month. The North Carolina General Assembly unanimously passed this legislation, which my office drafted and Gov. Roy Cooper signed into law. The SAFE Child Act makes North Carolina safer for our children.

This law applies to each of us by expanding the duty to report child abuse to every adult. That means that if you’re 18 years or older, and you know a child is being abused, you must report it to your local law enforcement agency. Previously, this legal obligation only applied if a child was being abused by a parent or in their home. But our children need to be safe everywhere – with any adults they spend time with. If you know a child is being abused – whether the alleged abuser is a relative, a coach, a camp counselor, a Boy Scouts or Girl Scouts troop leader, or a religious mentor – you must report it to law enforcement. Each one of us has a responsibility to keep kids safe.

The law also extends the statute of limitations to bring certain criminal actions against people who have allegedly committed child abuse. A prosecutor will now have up to 10 years, instead of the original two years, after the date of an alleged incident to bring a misdemeanor criminal child abuse charge. Those actions include crimes like sexual battery, misdemeanor child abuse, and failure to report child abuse. This piece of the law applies to misdemeanor crimes only because there is no statute of limitations on felony crimes, and prosecutors can always bring actions related to these crimes, regardless of when they occurred.

The law also helps victims hold their abusers accountability for the harm they suffered. It increases the amount of time that a person who was sexually abused as a minor can file a civil lawsuit against their abuser. Previously, people were only able to file such lawsuits until they turned 21, but can now file until the age of 28. A better understanding of the science of trauma has shown that it can take years, and often decades into adulthood, for people to process and heal from childhood abuse and violence. Increasing the statute of limitations to the age of 28 is an important first step in helping survivors of childhood abuse get some closure, but I will continue to push to increase the statute of limitations to a substantially later age. And starting Dec. 1, anyone who was originally barred from taking civil action because of the old statute of limitations, no matter their age, will have two years to file an action under the SAFE Child Act.

Protecting our kids wherever they are means includes protecting them online, where they spend more and more time. The SAFE Child Act better protects kids from online sex abusers. It bars high-risk sex offenders from contacting anyone under the age of 16 using social media or social networking platforms, collecting information about anyone under the age of 16, or violating social media platform policies.

Keeping our children safe from abuse and violence is job one for us all, and the SAFE Child Act will do exactly that. I’m proud of my office’s efforts to draft and champion this law and for the support we received from advocates, legislators, and survivors. We must do everything we can to protect our kids from this type of heartbreaking violence. Every child deserves to grow up in a safe environment.

And as we head into the new year, my office will continue to further our efforts to protect children and other victims and survivors of violence and crime. After all, protecting the people of North Carolina is our highest priority.

On behalf of the Department of Justice, I hope you have a wonderful holiday season. We look forward to continuing to serve you in 2020.