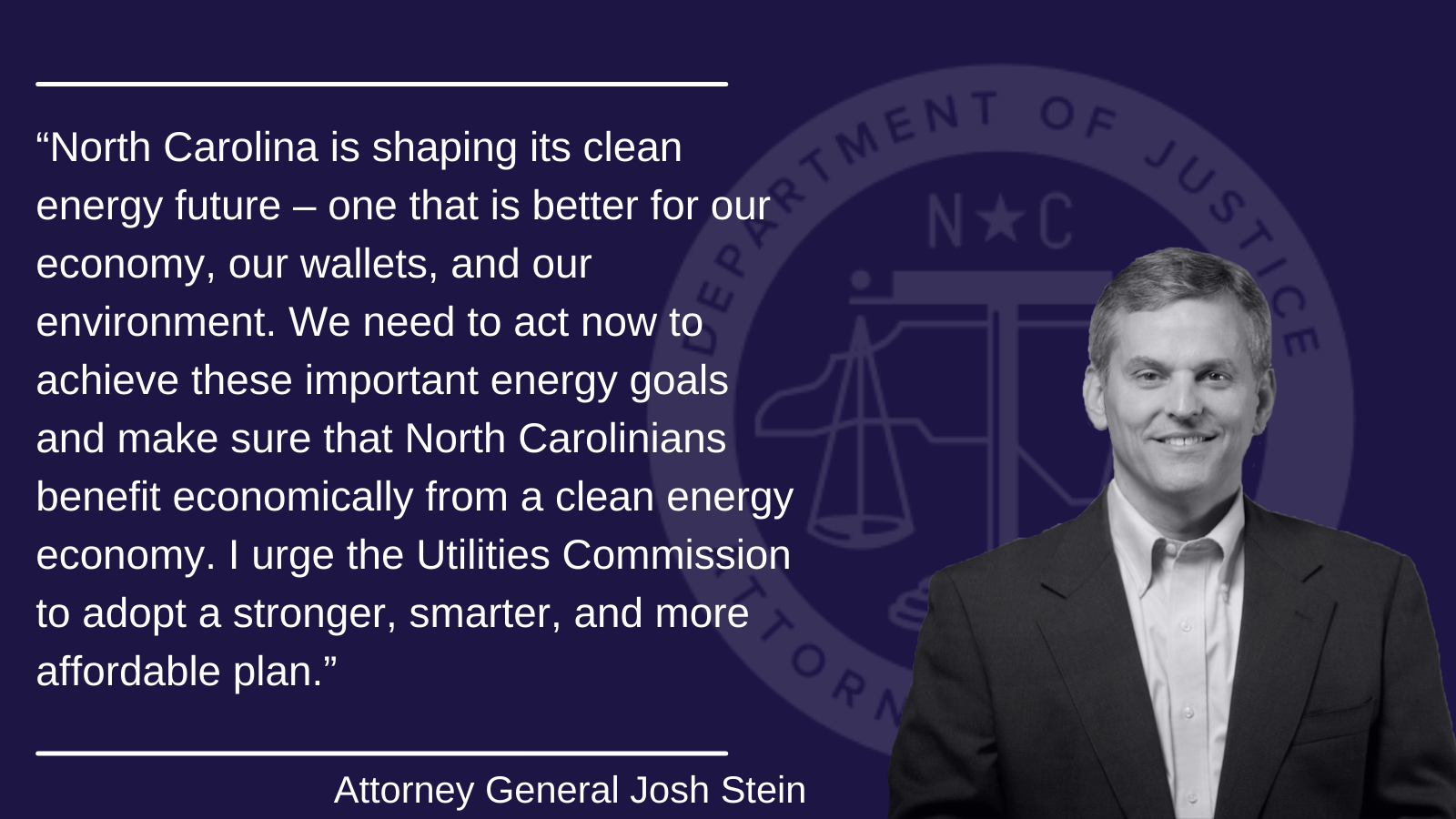 (RALEIGH) Attorney General Josh Stein filed testimony with the North Carolina Utilities Commission calling for a stronger, affordable clean energy approach than the one proposed by Duke Energy. Attorney General Stein is pushing for an alternative carbon plan that would dramatically reduce carbon emissions in North Carolina over the next eight years and achieve net-zero carbon dioxide emissions in the next three decades. Under state law, the Utilities Commission must develop a plan this year that would reduce emissions 70 percent from 2005 levels by 2030 and achieve carbon neutrality by 2050.

“North Carolina is shaping its clean energy future – one that is better for our economy, our wallets, and our environment,” said Attorney General Josh Stein. “We need to act now to achieve these important energy goals and make sure that North Carolinians benefit economically from a clean energy economy. I urge the Utilities Commission to adopt a stronger, smarter, and more affordable plan.”

The emissions requirements would apply to Duke Energy, which submitted its own carbon plan to the Utilities Commission. Duke’s plan identified four possible pathways, but only one actually achieves the 2030 emissions goal. Attorney General Stein and energy experts argue that Duke’s plan falls short of what’s needed to achieve these reductions and would burden North Carolina ratepayers with unnecessary rate hikes.

In expert testimony, the Attorney General’s Office demonstrates that an alternative plan is possible that is less expensive than Duke’s, so it would help ratepayers. An alternative plan would also benefit the environment because it would retire coal power plants sooner, rely less on natural gas, and invest more in renewable energy.

An alternative approach that creates more renewable energy would also give North Carolina a more competitive economic and energy edge after the passage of the Inflation Reduction Act this summer. The Inflation Reduction Act will transform energy investments over the next decade, and it will also make renewable resources smarter investments. While the effects of the law are still being determined, Duke’s plan did not take into the account the effects of this legislation and is now outdated.

A copy of the Attorney General’s filing to the Utilities Commission is available here.