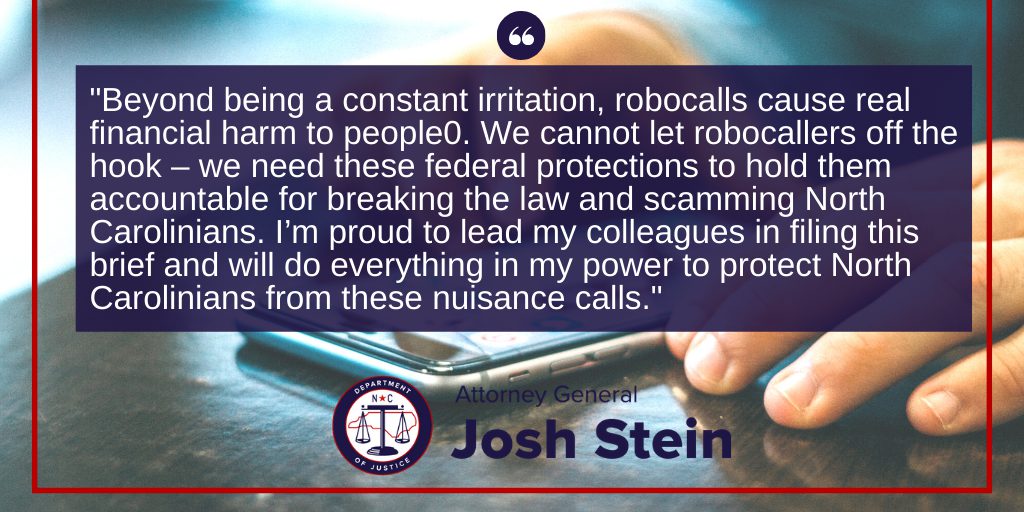 “Beyond being a constant irritation, robocalls cause real financial harm to people,” said Attorney General Josh Stein. “We cannot let robocallers off the hook – we need these federal protections to hold them accountable for breaking the law and scamming North Carolinians. I’m proud to lead my colleagues in filing this brief and will do everything in my power to protect North Carolinians from these nuisance calls.”

In 2015, the president signed into law a government debt exception to the TCPA. The exception allows for calls and texts to collect on debts owed or guaranteed to the federal government. In 2020, the U.S. Supreme Court invalidated that exception and severed it from rest of the TCPA. Later, a district court ruled in Lindenbaum v. Realgy that because part of the law was struck down, the TCPA is invalid and cannot be used to hold robocallers accountable for their actions between 2015 and 2020.

The brief, filed in the U.S. Court of Appeals for the Sixth Circuit, asks the court to reverse the lower court’s ruling. The brief argues that the Supreme Court’s 2020 decision made clear that the invalid government debt exception did not affect the TCPA’s primary robocall ban. It further argues that the district court’s decision was inconsistent with basic principles on severability.

State attorneys general are at the forefront of the fight against robocalls, which are immensely frustrating and can cause real financial harm to people. In January 2020, people received more than 4.7 billion robocalls nationwide. The attorneys general have several ongoing enforcement actions under the Telephone Consumer Protection Act (TCPA), and invalidating the law on a technicality would let robocallers off the hook. The bipartisan coalition argues that aside from the government debt exception, the rest of the TCPA can and must be upheld so it can be enforced.

In 2020, North Carolinians reported nearly 10,000 robocalls and unwanted telemarketing calls to the North Carolina Department of Justice—the number one consumer complaint filed with the office. Attorney General Stein is leading efforts nationwide to confront these incessant calls. In December, he won a $14 million penalty against Dish Network for engaging in illegal telemarketing and violating do-not-call laws, the largest-ever state penalty for do-not-call violations. He also launched the Robocall Report Task Force so North Carolinians can report robocalls online (www.ncdoj.gov/norobo) and through a dedicated robo-report hotline (1-844-8-NO-ROBO). He also led 51 attorneys general and 12 phone companies to launch the Anti-Robocall Principles to combat robocalls.