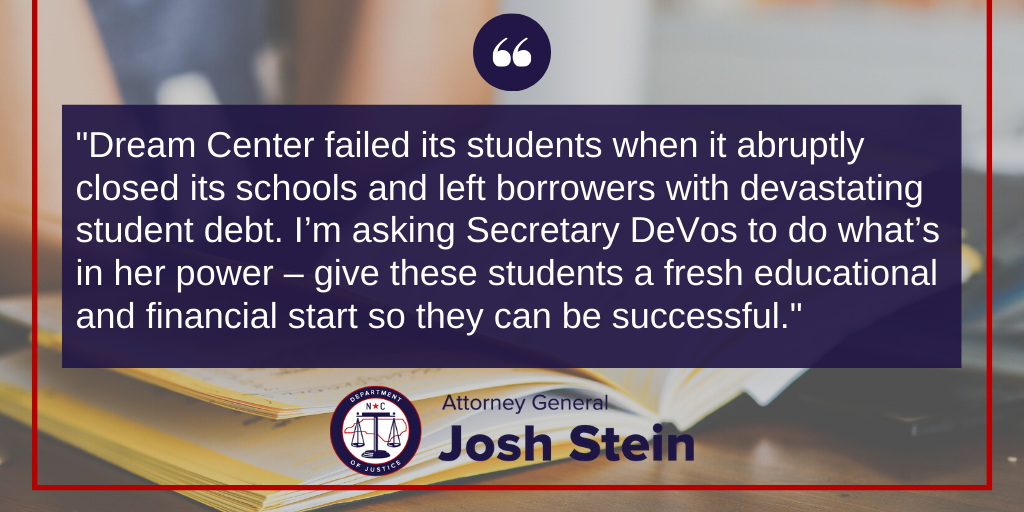 (RALEIGH) Attorney General Josh Stein today again asked U.S. Department of Education Secretary Betsy DeVos to use her authority to forgive federal student loans for all students who were enrolled in now-closed schools operated by Dream Center Education Holdings LLC. In July 2018, Dream Center abruptly announced that it would be closing all of its North Carolina schools – the Art Institutes of Charlotte and Raleigh-Durham, and South University in High Point.

“Dream Center failed its students when it abruptly closed its schools and left borrowers with devastating student debt,” said Attorney General Josh Stein. “I’m asking Secretary DeVos to do what’s in her power – give these students a fresh educational and financial start so they can be successful.”

Dream Center, a California-based nonprofit, went into receivership in January 2019. Under the federal closed school discharged (CSD) regulation, former students may be eligible for a 100 percent discharge of their federal student loans if they were unable to complete their program because their school closed. CSD is only allowed for students who were enrolled at the time the school closed, were on an approved leave of absence when the school closed, or withdrew within 120 days of the school’s closure, unless the Secretary of Education approves a longer period.

Attorney General Josh Stein initially contacted the Department of Education when Dream Center announced the school closings in July 2018 to seek assurances that students would be treated fairly. He reached out again in October 2018 and October 2019 to urge Secretary DeVos to extend the CSD eligibility period for Dream Center students so that more students would be eligible for student debt relief. In November 2018, Secretary DeVos granted Attorney General Stein’s request to expand closed school discharge eligibility to June 29, 2018, but additional investigation into Dream Center’s actions necessitate further expansion.

In today’s letter, Attorney General Stein and the bipartisan coalition of 26 attorneys general urge Secretary DeVoS to go further and provide debt relief to all Dream Center students unfairly strapped with burdensome debt for which they have little to show. The coalition again outlined Dream Center’s misconduct and mismanagement that prevented students from obtaining degrees and unfairly left them to repay federal student loan debt that they borrowed to attend the failed schools.

A copy of today’s letter is available here.