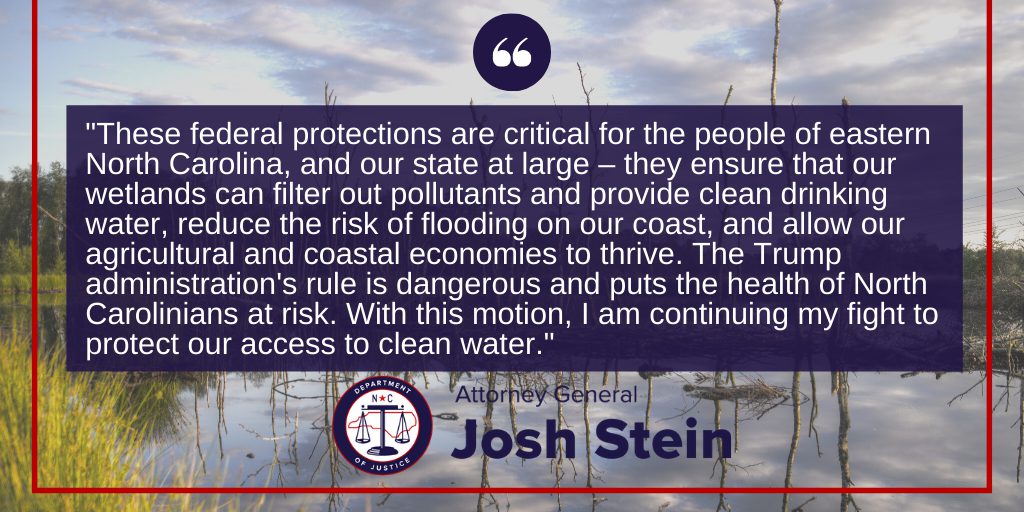 (RALEIGH) Attorney General Josh Stein filed a motion for summary judgment in his lawsuit challenging the Trump administration’s unlawful final rule redefining Waters of the United States (WOTUS) under the Clean Water Act. The final rule would endanger North Carolina’s rivers, lakes, and fisheries by reducing federal protections for these waterways to their lowest levels since the 1980s.

“These federal protections are critical for the people of eastern North Carolina, and our state at large – they ensure that our wetlands can filter out pollutants and provide clean drinking water, reduce the risk of flooding on our coast, and allow our agricultural and coastal economies to thrive,” said Attorney General Josh Stein. “The Trump administration’s rule is dangerous and puts the health of North Carolinians at risk. With this motion, I am continuing my fight to protect our access to clean water.”

Attorney General Stein initially filed a lawsuit challenging the final WOTUS rule in May 2020. The definition of WOTUS under the Clean Water Act is critical to federal safeguards for water pollution control and water quality protection that preserve the integrity of our water. The Trump administration’s rule narrows the WOTUS definition to eliminate federal protections for many waterways, including many that are clean water sources and critical to people’s health and quality of life, and wetlands that protect the people and economy of eastern North Carolina.

The North Carolina Department of Environmental Quality is also joining this motion. Attorney General Stein is joined in this filing by the Attorneys General of California, New York, Connecticut, Illinois, Maine, Maryland, Massachusetts, Michigan, New Jersey, New Mexico, Oregon, Rhode Island, Vermont, Virginia, Washington and Wisconsin, and the District of Columbia, as well as the California State Water Resources Control Board, and the City of New York.

A copy of the motion for summary judgment is available here.