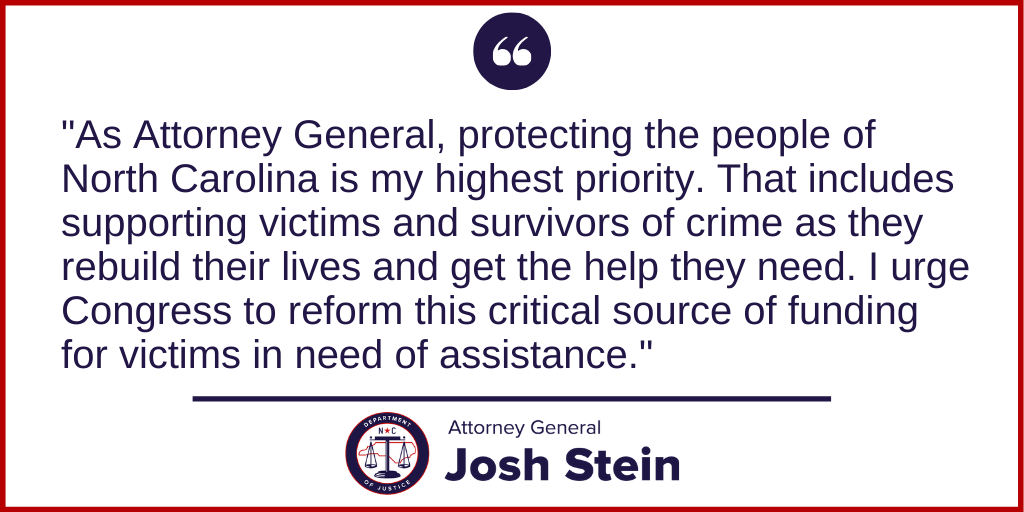 (RALEIGH) Attorney General Josh Stein today urged Congress to adopt key changes to the Victims of Crime Act (VOCA) that will provide critical financial support to victims of violent crimes and their families.

“As Attorney General, protecting the people of North Carolina is my highest priority,” said Attorney General Josh Stein. “That includes supporting victims and survivors of crime as they rebuild their lives and get the help they need. I urge Congress to reform this critical source of funding for victims in need of assistance.”

In their letter, the attorney generals call on Congress to adopt changes to the Crime Victims Fund, a national fund established by VOCA that supports states’ victim services programs. The fund is the primary funding source for victim services in all 50 states and six U.S. territories. It covers essential direct services and support for victims and survivors in the aftermath of crime, including medical care, mental health counseling, lost wages, courtroom advocacy, and temporary housing. The fund’s money comes from criminal fines, forfeited bail bonds, penalties and special assessments. While deposits have decreased in recent years because of a drop in legal fines and penalties, withdrawals have increased, leaving the fund’s financial health in jeopardy.

The attorneys general are asking Congress to stabilize the fund’s finances and provide more flexibility to grantees by:

Attorney General Stein is joined in sending today’s letter by the Attorneys General of all other 49 states, the District of Columbia, American Samoa, Guam, the Northern Mariana Islands, Puerto Rico, and the U.S. Virgin Islands. The National Association of Attorneys General (NAAG) played a key role in facilitating this letter.

More on Attorney General Stein’s work to protect victims and survivors of crime: